So, I still don’t have Ninja to 70 yet (that should be done tonight or tomorrow), but the good news is, that’s in part because I got entirely distracted today and made a new glamour. Since I’ve been progressing through the Main Scenario with my partner, I’ve been spending my playtime during the day mostly leveling Samurai, since I’m still debating a swap over to that for my main job in place of Ninja. I haven’t been entirely in the mood to spam dungeons, though, so here and there I’ve been messing around with the new changes to PvP.

Overall I like the reduced button load in PvP (though I’m still struggling to figure out hotbars for some classes, since the automatic combos really kind of mess with my muscle memory). Mainly, I’ve been playing Samurai to try things out, but yesterday I remembered an old goal I had during Heavensward to pick up the Unseen title from playing Feast on Ranged DPS. I originally played around with Bard a bit, on the striking dummies in the Wolves’ Den, but I couldn’t get a hang of it, so I ended up trying out Machinist. I found I quite liked the basics of its play style, but my last Bard glamour really wasn’t going to work for it, so I had work to do. 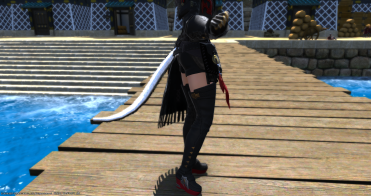 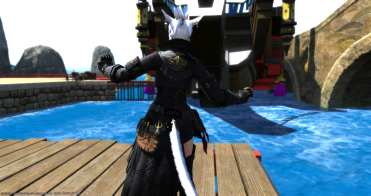 Thankfully, there’s a great new piece of gear available right at level 60 for Ranged DPS in the new Gaganaskin Jacket, which is a dyeable recolor of the stylish Wrangler’s Jacket from the 3.3 Heavensward dungeons. I only got one glamour put together with that, since its color scheme was a bit limiting, but now we can dye it! It doesn’t dye very nicely in Pure White (but honestly, so few things do, I suppose that’s not surprising), and with the red accents it has, black seemed the next best option.

Of course, with black and red, that filled in the rest of the pieces almost automatically. I went with the Griffin Leather Gloves over the Bogatyr’s version since the former have gold tips, which made the gold in the jacket. The only piece I deliberated on was the glasses: I actually wanted to go with some type of hat, or perhaps some goggles for Machinist, but I couldn’t find anything I was really sold on, since the companion cowboy hat just really isn’t Alahra’s style.

On top of having a fun new glamour, I’ve also been enjoying Machinist in The Feast as a nice diversion. I’m not sure if I’ll ever get really serious about PvP, but the new changes have definitely fixed some of my biggest issues with the older system, so at the least it will make running PvP to get glamour items when I need them much less of a hassle!