I finally got to 70 on Ninja Wednesday night! It took awhile and longer than what I had hoped for, but in the end it was all worth it. I really enjoyed the final Ninja quest, but of course, the only reason it really mattered was that I needed that gorgeous new Artifact Armor. I’ve been curious about it ever since we saw Yugiri in her palette-swapped version in the teaser trailer for Stormblood, and my anticipation only grew once we saw the standard color scheme: black and red (with a little white!), two of my favorite colors for Alahra.

As usual, I only really liked the body piece, so as soon as I got the gear on Wednesday night, I sat down to punch out a quick glamour. To start with, I went with most of the pieces from my last Ninja glamour, since it already worked pretty well for a black and red scheme. I wanted to do more, though, and so Thursday morning I sat down to work out the real glamour. I’m pretty happy with the results, though I have a few minor quibbles. 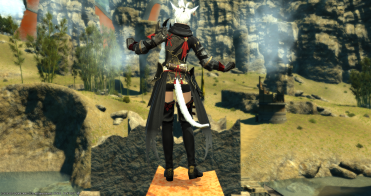 I was originally working with the Elegant Rimless Glasses as normal, but then I remembered the Circlet out of nowhere, which ends up working alongside the chainmail much better, I think. The gauntlets were a surprising fit that I’m glad I found. My standard Replica Allagan ones didn’t seem to mesh well with the chainmail’s style, but I wanted something long for hands slot. Were it not for these new ones, I’m really not sure what I would have done. The boots were easy: I was already using them, they match the chainmail’s color scheme, and I like their shape better than the other main option, the Scion Healer’s Highboots.

I had real trouble with the legs slot, though. When I first saw the chainmail in game, I felt certain it would work well with the Augmented Ninja Hakama, but I ended up being pretty wrong about that. The loincloth (which for some reason still displays with a body piece like this when no similar piece does) is just long enough that it looks out of place, and the silver accents don’t play well with the chainmail’s gold, either.

The Lady’s Knickers are honestly the wrong shade of black (and nondyeable on top of it), and neither the Expeditioner’s or Gyphonskin Pantalettes work well (the former because of brown leather parts and the latter because of dyeing problems). I even tried a few pairs of pants, using the Ruby Cotton Gaskins for awhile, but something about that seemed off. If Ninja had access to some version of the Makai Quartertights, things would be easy, but nothing’s ever easy, is it? I settled on the Knickers mostly because the difference in blacks isn’t especially noticeable in most normal lighting situations, but this is one area I’m going to be looking for a replacement as we get new gear throughout Stormblood.

For now, this glamour has a good chance of lasting awhile for Ninja. I’m always partial to using the Artifact sets where I can for it, and I really like the new one. Ninja’s Ala Mihgan Tomestone gear doesn’t particular excite me. The normal mode of Omega is launching on Tuesday, though, so it’s possible the new Genji armor will have something in it I want to use. Since it’s apparently going to be armored stuff, I’m not sure how I’ll feel about it for Ninja, though. We’ll see!