Since hitting 70 on Ninja, I’ve honestly started to grow unsatisfied with the class. I loved how it felt on the road to the level cap, but around level 68, once Bhavacakra is unlocked, I started to sense a certain tension in the class design centering around the Ninki gauge. Once I hit 70 and unlocked Ten Chi Jin, I found myself getting rather frustrated when running Experts and the like on Ninja. It’s been enough of a dealbreaker that I’m currently in the process of deciding, at the least, on a new temporary main until some sort of changes are made to Ninja (hopefully to Ten Chi Jin).

For now, I think I’ve settled on giving Bard a whirl (though actually getting it to 70 will wait until I finish up Paladin). The last glamour I put together for Ranged DPS definitely felt like a Machinist glamour, so in advance of my beginning to level Bard, I wanted to come up with a more suitable glamour for it. I really wanted to do something entirely new, but after some experimentation, I ended up making some modifications to my last Bard glamour instead. 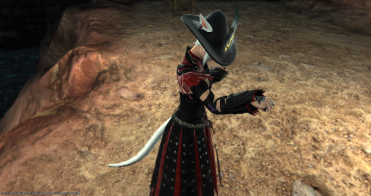 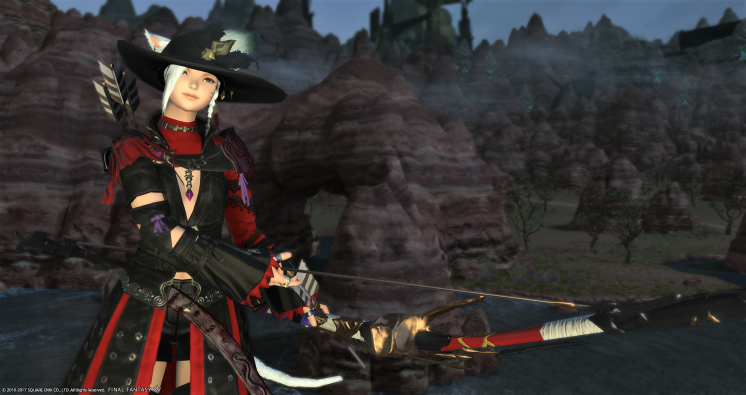 Since Stormblood hit, I’ve really been feeling Alahra in black and red again, and when I set out to figure out this Bard look, I knew I wanted to go for that pairing here, too. I thought about using the Holy Rainbow Shirt of Aiming at first, but I couldn’t find a pair of gloves for Bard that I liked with it, since I don’t like the way the Augmented Shire Conservator’s Coat dyes, I didn’t know where else to really go. After awhile, I admitted to myself that I really missed the Garo PvP body. It’s always looked great on Alahra for Bard, and at least for a level 60 look, I can’t think of anything else I’d rather wear.

I didn’t want to do the exact same thing I did last time, though. For one, I’m not planning to play Machinist heavily anytime soon, so I settled on making a Bard-specific glamour again, and this time, I really wanted to go back to the classic Choral Chapeau. I also wanted to use something different than the Demon Bracers—they weren’t a horrible fit, but I felt the need for something new. Since I was already going Bard specific, I thought the Ringbands would be a nice sort of accessory for the Battledress, and once I got the Augmented ones, I knew I was right. They work quite well with the elegant style of the dress, I think!

The Quartertights and the Highboots are standards, of course. I didn’t want to use the Aoidos’ Tights again since the small bit of orange would stick out noticeably against the red, so I went with the Makai shorts instead. All in all, this isn’t a groundbreaking glamour, but I’m excited about it, and excited to get around to playing Bard. I just have to finish Paladin to help with Expert queues, which is going a bit more slowly than I would like!