My tastes in glamour are by now far from secret, with glasses and thighboots and thigh gaps and all of that by far the most populated tags on Fashion Ninjutsu. I can find a way to make these things work (for me, at least) on just about every job. Along with all of those, there are specific gear models that I tend to want to use whenever they’re available. The Orthodox Tunic (and all of its assorted variants) is one of those, and of course, the Kirimu Coat is another one. With regards to the latter, I’ve probably used every version of the coat at least twice (and some of them far more than that), but one of them has always given me trouble: the Chivalric/Griffin Leather Coat of Striking.

Back when I did my first glamour with the Scouting version of the Coat, I talked about how it felt off for Ninja’s action animations, and I’ve always had a reluctance to use the Striking version for similar reasons related to how flowing Monk’s combat style is. In fact, I’d say Monk’s animations bother me more than Ninja’s with respect to the Coat. I’d also avoided using it toward the end of Heavensward due to the fact that I’d gotten into one of those Pure White kicks, and I didn’t care for the way its constant colors worked with the Coat in white.

Obviously, though, things have changed. We have Samurai on Striking gear now, too, and my mental need to use Pure White on everything has mostly taken a back seat to wanting to use new goodies from Stormblood. Giving the Striking Coat another whirl has been on the back of my mind since I got Samurai to 70, and Wednesday night my partner mentioned the Coat while pondering glamours for one of her alts, which was enough to give me a glamour bug. 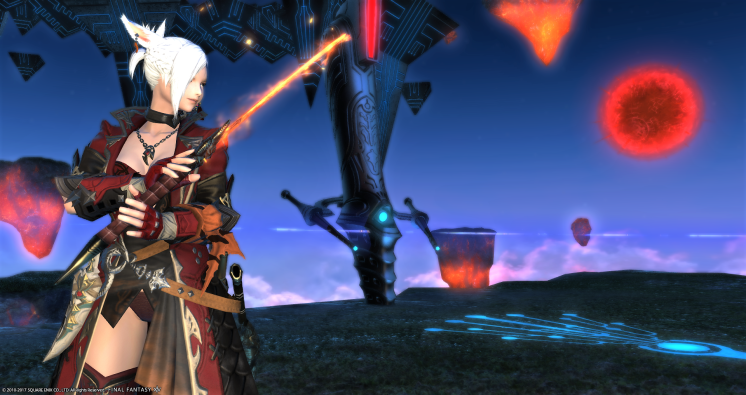 It’s pretty rare I use items like this in their default color scheme, but once I saw that the Tigerskin boots more or less match the Coat, the glamour started coming together without much need for dyes. With the red, orange, and brown on those two pieces, the Sky Rat Gloves were an easy choice—I really like their style but they tend to dye poorly. Those three together resulted in a really nice core look before I even got around to choosing a head-piece or something for the legs.

I looked around for quite some time to find a legs piece that wasn’t the Light Steel Subligar. I’ve been trying to find something better for a really long time, and I thought perhaps with the Striking version of the Coat I could find something that blended in a better way. I thought the Expeditioner’s Pantalettes might work because of the brown leather straps, but after experimenting with them they just didn’t seem to really mesh with the coat’s style. The Makai Manhandler’s Quartertights didn’t really feel right either, which were the other main thing I tried. I’m not really sure what I’m truly looking for to replace the Subligar for these kinds of looks, but whatever it is doesn’t seem to exist in the game yet.

From there it was just finishing touches. I went with the Circlet instead of glasses mostly to use something different but also because it generally seems more fitting for both Monk and Samurai than those. With just enough orange in the glamour to key off, I also got to have a glamour that really works with the Inferno Katana, too, so that was a great little bonus. I’m quite happy with this one so I imagine it’ll stick around for awhile. If I ever get around to doing Verity gear for Samurai I might do something new, though.