So far in Stormblood, I’ve been taken a fairly relaxed pace after hitting 70. I did, during the first two weeks, get both Ninja and Samurai to level 70, but we’re nearly four weeks in now, and I don’t have a third level 70 class yet (the third, Paladin, will be at the level cap in a couple of days, probably). I’m not so bothered by that, really, though I do need to pick up the pace if I’m going to figure out what my temporary main’s going to be while I cross my fingers and hope for modification’s to Ninja’s Ten Chi Jin action. One thing this less frantic pace has allowed is for occasional bouts of leveling on my primary alternate, Lynahra, who never quite made it to level 60 before the end of Heavensward.

Over the weekend, I spent some time working toward that delayed goal, and I got lucky during our first two runs of the Aery, picking up the ever-useful-for-glamour Orthodox Gauntlets and Greaves. Since I’d been getting a little tired of Lynahra’s last glamour, I took some time during a break between runs to play around with them a bit. At first, I thought to combine them with a dyed Augmented Fighter’s Cuirass, but I couldn’t find a good color blend for that, so I ended up going with something much lighter. That’s fitting for Lynahra’s character anyway, so I’m pretty happy wtih the result. 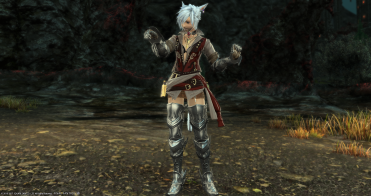 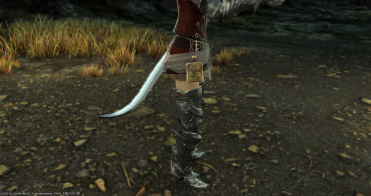 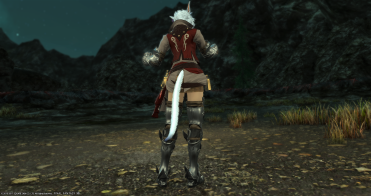 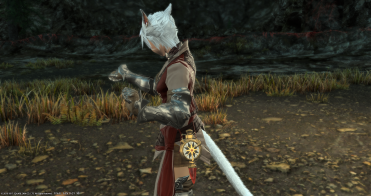 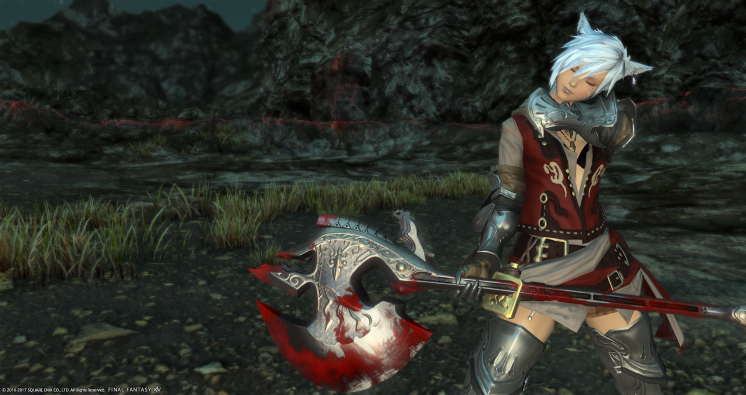 While leveling Lynahra, I’ve gotten really attached to her Bravura Atma, and I didn’t want to abandon it, even if my plan was to leave the Warrior’s Cuirass behind. That meant going with a body piece in red for color coordination, and give Lynahra’s current level, that left me with more or less one solid choice in the Holy Rainbow Shirt. Normally, I don’t think I’d have done this glamour without the Dravanian skins of the Gauntlets and Greaves, but it’s not very likely that I’ll do heavy farming of level 60 dungeons to pick them up for her (and I have another glamour in mind for when I hit that level anyway).

The Orthodox ones work well enough, though, even if they don’t specifically match the wine red of the top. They do, however, have a bit of a brown or tan color where the Dravanian ones have red, which makes sticking with the Guardian Corps Skirt an easy choice, just to break up the colors from the shirt a little bit. One thing I do hope to find is some sort of head-gear for Lynahra to use as a standard. She looks ridiculous in glasses and circlets both, and most helmets are right out, but so far her looks often feel like they need just a little something extra. I’ve no clue what that might be right now, though, so going without will have to do.