Progress on leveling Red Mage has been steady: as of writing, I’ve hit 66, and I’d imagine by the time this post is actually up on the site, I’ll probably be 67 or 68, with just a little more to go until the new level cap. The class has continued to be a delight. It’s fun to play, satisfying both audio-visually and mechanically in a way that none of the other classes I’ve played in Stormblood have managed. It’s also finally allowed for me to play around with the wealth of cool caster gear that I haven’t spent much time with. There are a ton of pieces I still want to play with from older gear even, but I’ve finally gotten to the point where I can play with what may be my favorite new body piece in Stormblood. We can skip the preamble and get right to the good stuff, I suppose, can’t we? 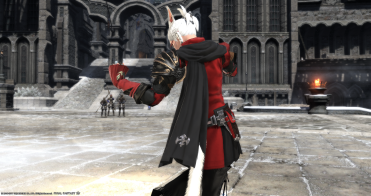 My first run through 60-70 was alongside my S.O.’s Red Mage, and when she hit 66 and picked up the Serge Gambison, I was incredibly jealous. The Ninja body piece at the same level doesn’t have near the style or flair that the Gambison does (and seems to be a really strange fit to be completely honest). Casters also happen to have the best dyeing version of the Gambison, and so I’ve been eagerly awaiting getting to the proper level on Red Mage so I could build a glamour around it.

The Star Velvet leggings and the Evenstar Bootees were easy choices—I was already using them and knew I wanted to stick with the red and black theme. The Gambison’s also long enough that the Scion Healer’s Highboots weren’t quite a good fit, so I didn’t see any good reason to swap from the red version of my last glamour for Red Mage. Gloves provided a little trouble. The Gambison’s not very friendly to elbow gloves in my opinion, but it did need something with at least some length, so the small gloves I’d been using before weren’t going to do the trick. The Warwolf Gloves ended up having just the right color balance between amounts of red and black that I settled on them fairly quickly.

I spent awhile trying to find a good hat or hood for the look, too. Though I’ve never really been a huge fan of the Star Velvet Hood for Alahra, it looks great dyed Dalamud Red, and I considered it pretty heavily. In the end, though, I just couldn’t stick with it, since the Hood is something I associate very heavily with Alahra’s mother in a roleplaying sense. That meant sticking with the staple Rimless Glasses—even if I’m a little tired of using them, I still think of them as pretty core to Alahra’s look, so I need to have something I really like to use something else.

I think this look will make it the rest of the way to 70. Once I have the Red Mage Artifact Armor, I’ll probably re-evaluate my glamour for the class, since if nothing else I really want to use those thighboots, and the hat looks pretty nice, too!