I mentioned in the last Patron Only glamour that I also liked the Healing Shisui set, and that was where I decided to start. I finished collecting the full set while leveling Scholar, and I’m quite fond, in particular, of the Shisui Kohakama of Healing—they have pretty tails! I like the garters, too, and the overall white and red color scheme, which is what Alahra looks best in. As you can guess from the header image, I didn’t end up going that route, but I definitely tried!

Most of my initial attempts focused on three items: the Shisui Mengu (which I ended up keeping), the Kohokama, and the High Summoner’s Boots, dyed Pure White. I wanted shorter boots to show off the garters on the Kohakama, and something about the High Summoner’s ones worked for me. The trouble came in with the body and hands pieces, though. Most bodies make the tails on the Kohakama disappear (I hate that!), which I wanted to avoid. That limited me to a very small number of things, like (of course) the Shisui Joi of Healing, the Taffeta Shawl, the Light Steel Galerus, and the Hempen Camise. The Joi had the most promise, naturally, but I couldn’t find a pair of gloves that I liked with it, and it’s the sort of thing that may have to wait for new items for me to come back to.

That meant I had to go back to the drawing board. I still had the Shisui Mengu, which I wasn’t ready to give up yet, which meant something red. I threw the Scion Healer’s Highboots back on (what else was I going to use?), and for whatever reason that made me think I should go Scholar-specific for this one, with the thought of using the Argute Culottes. Then I remembered that those have the weird black leather on the back that disappears, and I settled on the Savant’s Culottes instead. The rest fell into place fairly easily. 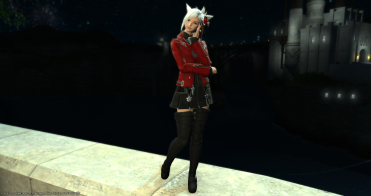 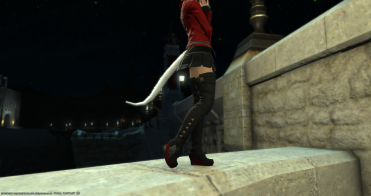 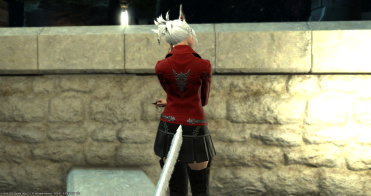 I really liked the thought of a black skirt with the boots, and the pairing really struck me once I had them together. From there, the most “Scholarly” top outside of the original Scholar’s Gown, which covers the skirt, was the Scion Adventurer’s Jacket. I strongly resisted the urge to go with glasses of some kind despite the Scholar feel—I really like the Shisui Mengu, I have to admit.

I did briefly consider going with Jet Black Augmented Scholar’s Culottes with the Warwolf Boots of Healing (which was an old 2.x staple for me), but the orange on the socks for the Culottes bugged me with the red in the flower. That’s an idea I might come back to once I’ve gotten Scholar to 70 (though my progress has been slow, so who knows when that will be).

That about does it for this one, I think. I didn’t end up anywhere near where I planned to, but the longer I sit with this look, I’m pretty happy with it, so I think it’ll last a good while while while I casually work at getting Scholar to the new level cap.