It looks like I’ll be going back and forth between Bard and Scholar for a little while, since I haven’t committed to one or the other as my next 70 and, at least for now, I’ve been mostly keeping them at pace with one another. It’s been pretty rare that I’ve been having such fun on two classes at once, but like I mentioned with Scholar last time, I’m really enjoying Bard now that I’ve hit 64. I was never a fan of the Heavensward version of Wanderer’s Minuet, so I was already enjoying the return to the old style from A Realm Reborn, but the longer timers for Bard’s damage-over-time effects at level 64 has really made the class for me. I always had trouble with their 18-second durations and multi-dotting before; with 30 seconds on each, though, I can multi-dot much more frequently and it’s really fun on dungeon packs.

Of course, hitting 64 also meant that I got access to the Aiming version of the new Kudzu Tunic. I’ve already posted glamours for the Scouting and Striking versions (and I’ve actually gone back to that glamour for my Ninja), and I didn’t think I was actually going to do one for Bard since I don’t care for the way the Aiming one dyes. I couldn’t resist at least trying to use it, though, and I think it worked out okay! 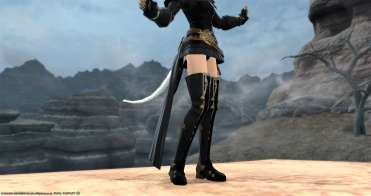 Unfortunately, the Aiming version of the Kudzu Tunic has an extra dyeing channel compared to the Scouting and Striking ones, which means that it dyes in a two-tone fashion, making it lose some of its character in basically any color you choose to dye it, and also leaving less to key off of for gloves and boots. In situations like that, I’m rarely happy with any dye except for Jet Black (Pure White certainly wasn’t going to work, since it makes the central area that stupid grey), so I settled on that pretty quickly. As it turns out, though, that worked out all right, as it led to a pretty cohesive look.

The main feature that remains on the Tunic are the bits of gold, and thankfully, Bard has access to some great pieces that work well for a black-and-gold look. The Griffin Leather Gloves have their gold-capped fingertips, and the Eikon Leather Thighboots are the gold studs and plating. I’m especially happy about getting to use the boots; I got some good use out of the Scouting ones quite some time ago during Heavensward, but I’d never found a top with the right amount of gold for the Aiming version to work.

There’s probably nothing to explain about the Choral Chapeau—I probably won’t have anything else I love just as much for Bard until we have access to the dyeable version of the new Artifact hat (and lords I hope it’s easy to get!)—and there isn’t a whole lot to say about the old Light Steel staple either (except, I guess, that I didn’t use the Coeurl Beach Tanga since it dyes in the other two-tone fashion, with black and grey—yes, I care about that even when the piece isn’t normally visible!).

The more I run around on this one, the more I like it, though I also know that it’s probably going to be short-lived. Hitting 66 will unlock the Aiming version of the Serge Gambison. While it doesn’t dye as well as the Casting version I’m using for Red Mage, I like the model enough that I’m probably going to feel compelled to work with it much as I did with the Kudzu Tunic. But still, I’m really happy with this one!