I set out for this post to be a new Bard glamour, since I hit 66, unlocking the Aiming version of the Serge Gambison that I fell in love with for Red Mage. While I do like the Aiming version, I’m not quite sure what I want to do with it—it proved a bit harder to work with than I imagined it would. Since I was already in the mood to glamour, though, I needed to do something new, and one look I’d been meaning to do an update for was my last Samurai glamour. I had been meaning to do a look based around the True Griffin Chestpiece, but after trying that out some time ago, I couldn’t get it to work quite the way I imagined. So, as I normally do when I know I want to glamour and have little in the way of ideas, I started browsing the Market Board for interesting things I might have missed or haven’t considered heavily before.

The only thought I really had was that I wanted something I could dye red (or maybe orange), because I’d really come to miss the Inferno Katana that I had glamoured for most of my Samurai leveling experience. As it turns out, I didn’t even have to look for long: the Gazelleskin Corselet, which I’d not given much thought before was near the top of the Market Board listing and happened to dye really nicely in red! So, I picked one up and started playing around with it, resulting in a more or less modified, less modest version of the last glamour. 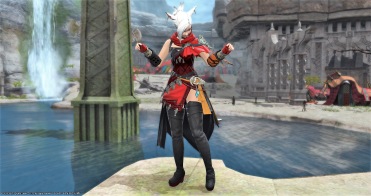 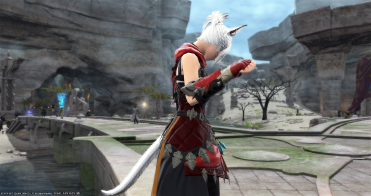 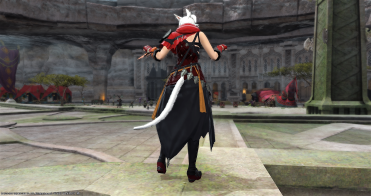 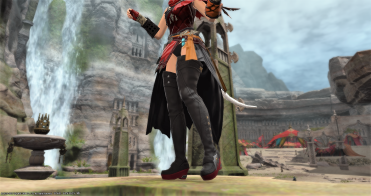 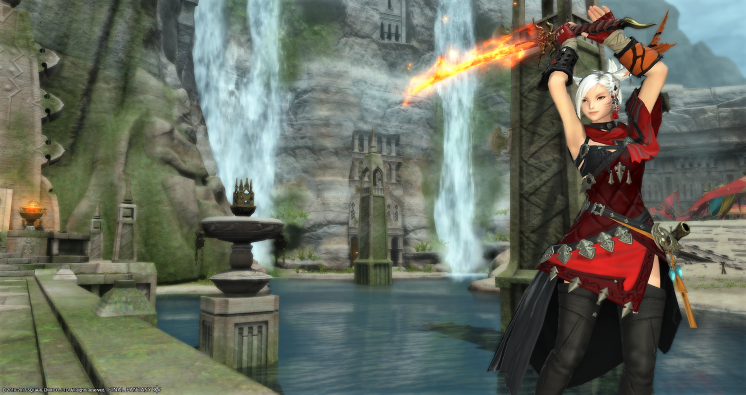 With the Corselet in red and black, I naturally went right for the Scion Healer’s boots, which in turn led me to the Griffin Leather Bracers of Striking, which I assumed would be the natural pairing, much as I’d used them for a couple Monk glamours in the past. The Bracers felt a little too short to pair with the Corselet, though, and I couldn’t get over that, so I had to find something new. Something longer seemed best, but the Replica Allagan Gauntlets didn’t feel right because of their gold accents (as opposed to silver ones as on the Corselet) and neither did the Augmented Hellfire Gauntlets of Striking, which didn’t mesh well.

After awhile (and some hands options I’m probably forgetting that I tried), I came back around to the Sky Rat Fingerless Gloves. I’ve been getting a lot of use out of those (and the versions for other jobs) lately, and so I was hoping to find something new. As it is, though, they’re both red and black, and they also have a bit of orange which works well since I was planning to go back to the Inferno Katana. Since nothing else seemed to work well, I stuck with them.

The Subligar is, of course, my standard choice for body pieces like the Corselet, though I originally started out with the Makai Manhandler’s Quartertights. Something felt off about them, though I can’t exactly place what. Maybe it was just a matter of symmetry, since the Corselet’s lopsided and the one visible leg of the shorts stuck out. Once I went back to the Subligar I was a lot happier with the look as a whole.

There might be another Striking glamour sometime over the next week; since Lynahra is heading for Samurai, I’m going to need to figure out something for her, too. I imagine she’ll end up with a different style than her sister, which is always a lot of fun for me to experiment with (and probably my favorite thing about having alternate characters).