I’ve been wanting to figure out a new glamour for Ninja for a little while now. Though I’m not actively using the class as my main (if anything, that honor belongs to Red Mage in a practical sense), I’ve begun to gear it in the hopes that something will be done to address the sort of unintended awkwardness in the class’s feel brought about in various ways by Ten Chi Jin. Any such changes are probably a long ways off (I’m not anticipating Patch 4.1 until sometime in October, and it’s unlikely we’d see any major adjustments prior to that), but it’s hard for me to stay away from the job that’s been Alahra’s main for years now.

I’ve gotten several ideas for various pieces lately, but I’ve been having trouble using most of them because they tend to result in looks that don’t feel fitting for Alahra. One of the things that caught my fancy in particular was the Head Bandage, which doubles as a dyeable blindfold (and would have been great back in the era of 2B cosplays). Alahra certainly isn’t blind (though I do think her need for glasses is canonical even if I don’t always glamour them), and besides that, she’s a bit too cosmopolitan to really pull off a blindfolded look.

I had some time to kill, though, and felt like playing around in any case, so just for fun, here we go: 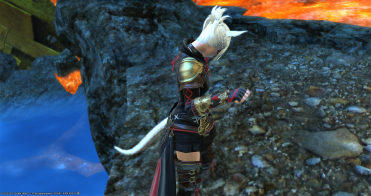 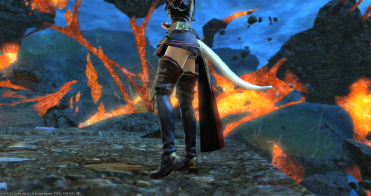 I was working on using several different pieces at once, more or less randomly experimenting while playing with the Bandage, one of which was the Ala Mhigan Gloves, since those are a piece I’ve been wanting to use since hitting 70 as well. They’ve got a really nice color scheme (red, black, and gold: what’s not to like?) for Alahra, but the ever so slight tribal character they have often doesn’t work with her normal styles. That’s kept me from incorporating them into anything permanent, but I did find that they worked pretty well alongside the Kudzu Tunic when it’s black in a way that doesn’t quite work the same when it’s in white (which I’d been using it in for awhile).

Once I settled on the Tunic for this look, the rest fell into place as you might imagine. The Light Steel Subligar had to replace my normal Coeurl Beach Tanga for a more “serious” look, and the Tigerskin Thighboots are hard to beat for any Scouting glamour with black and red. Overall, despite my loving the black Kudzu look for Bard, something about it in this case really doesn’t seem to fit Alahra (even without the blindfold), but I still think the look is pretty cool in any case.

I’m still hoping to find something new for Ninja since I’m playing it more again and a new glamour I’m excited about tends to make things more enjoyable for me, but for now I’m just not sure where to go. We’ll see what happens, though!