Lynahra is now on her fourth job. She started out as a Marauder long ago, on the journey to unlocking Dark Knight. That didn’t go so well, and I ended up switching to Lancer/Dragoon for some reason, and I managed to stick with that despite really disliking the class until 50, at which point I made the journey to 50 again as a Dark Knight. But then that didn’t feel right, and somehow I ended up back on Warrior. That felt perfect for a while (and in terms of character identity, still does), but it was more than I could do to keep playing Warrior in a mechanical sense. So, after pushing to get her “final” Warrior glamour, I made the decision to try Samurai.

I’d more or less dismissed the class out of hand for her: after all, she’s supposed to be somewhat uncultured, and certainly not refined. That’s why Warrior fit her so well once I finally made the switch to that, and going from Warrior to Samurai seemed like an odd choice. However, once I actually got on the job in Palace of the Dead, I realized that several of Samurai’s animations actually fit her very well. As something of an homage to her origins as a Frost Death Knight in World of Warcraft, I’ve always thought of her as being ice-aspected. As it turns out, both Yukikaze and Midare Setsugekka have ice effects. Samurai’s actions are also a lot less poised on the whole than I remembered them being when I leveled the job on Alahra. Some of them, like Ageha, are just downright brutal, even.

I don’t know if that’s going to be enough for me to finally get Lynahra to the level cap or not, but for now, it’s where she’s headed, and that means I needed a glamour. 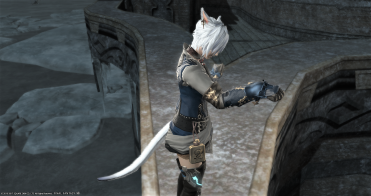 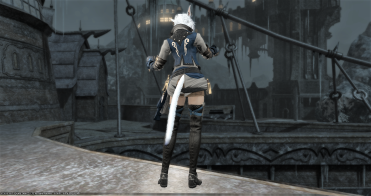 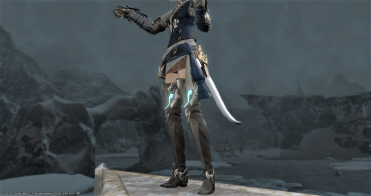 At 50, I started off using the Arachne Shirt of Striking as a placeholder (since Lynahra looked ridiculous in the Nameless Togi), but I quickly realized it wasn’t going to stand the test of time for her. Once she hit 52, I figured the staple Holy Rainbow Shirt would be a good place to start, since it had worked pretty well for some of her tank glamours. It was tough to figure out something since I didn’t have any pieces I definitely wanted to use—I was left mostly deciding on a color to dye the top and then finding pieces to go alongside it.

I played around with different thighboots (all of the usual suspects) and even did a little PvP to get the Direwolf Thighboots of Striking to try those, but none of that was particularly exciting. After awhile I thought to look for a better weapon glamour (instead of the starter Mythrite Uchigatana), hoping to find something to guide the rest of the look. So far, it’s been hard to find one fitting for Lynahra, since so many of the katanas are very elegant. None of the level 50 Primal ones felt right, nor did any of PvP ones. I don’t remember why I thought to try it, but I threw some Poetics at Rowena to get the Ironworks Magitek Samurai Blade, and I ended up rather liking it for her. It’s a bit longer than many of the other options, which works nicely since I always imagined her using greatswords.

That gave me something to work with. Once I’d settled on keeping the katana unglamoured, I picked up the corresponding Ironworks boots, and then it was mostly a matter of finding a good shade of blue. Normally, I use Othard Blue, Storm Blue, or Rhotano Blue for Ironworks stuff, but none of those shades looked good on Lynahra. I almost gave up on the idea before I tried Void Blue. It doesn’t match the Ironworks blue exactly, but the darker shade works much better for her, and in most lighting you can’t tell any major difference (especially since the blue on the boots and sword is not very prominent).

Moving forward I can’t think of many pieces on the way to 60 that will replace this look for Lynahra. I can see her perhaps wearing Shire or Sky Rat gear at 60, but I’m going to have to get there and play around with them first, and with alt play coming in fits and bursts normally, it’s hard to say just when I’ll get there. She looks good for the time being, though, and I’m happy with that.