I got back from vacation earlier this week, and after a week of not playing the game, I was having some trouble getting back into the swing of things. I did have a number of glamour goals in mind before I left, though, and so thankfully I had things to work on when I got back that weren’t so taxing. One of the items on my list was Red Mage—as time’s gone on and I’ve settled more into the class, I need a glamour that reflects Alahra more than it reflects the class itself.

I may love the Antiquated Duelist’s Chapeau from my initial level 70 glamour for Red Mage, but unlike the Augmented Choral Chapeau, it’s not dyeable, and after awhile I couldn’t take just how red everything was. I’ve a habit of generally dyeing hats, gloves, and boots black to accent whatever body piece I’m using (which nearly always has black in it somewhere), and so the red on the hat and gloves was really starting to stick out too much. Before I left for vacation last Tuesday, I took to just toggling the hat off as a temporary solution (I didn’t have time to glamour since I had to cap Creation all in one day!), but once I was back, I had to go beyond the temporary for something more lasting. 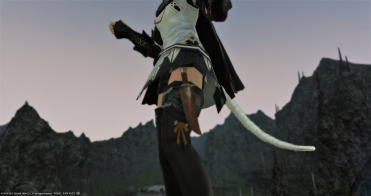 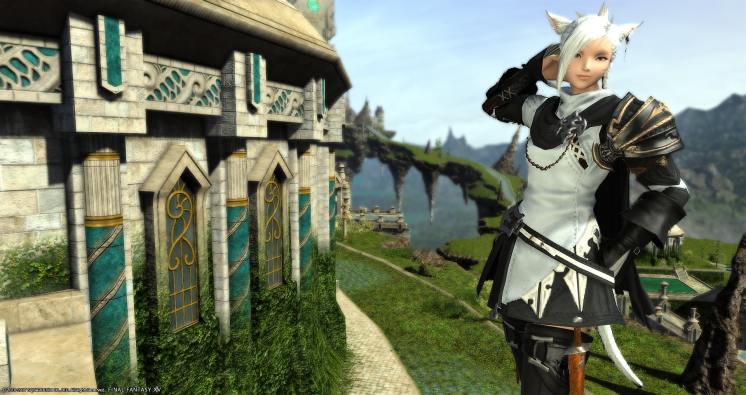 Obviously, from the pictures, the end result was more of a color change than an overall glamour change. I can’t bear to move away from the Serge Gambison just yet—I think it’s going to last a long time for me in general, and be a piece I keep coming back to, much like the various models of the Orthodox Tunics. Despite my initial intentions for the Gambison when I got Red Mage to 66, I hadn’t actually yet used it in Pure White, and so that ended up being the central decision for this one.

Using Pure White opened up a better option for gloves than the Warwolf Gloves I used last time, though I still considered using them in Jet Black for awhile. While I really like them, I think they’re better suited to Black Mage and Summoner than they are Red Mage. The Brand-new Halfgloves, by contrast, are heavier and feel more appropriate to swordplay. Their black-and-white color scheme is, of course, a natural fit here. They don’t mesh exactly as well with the Serge Gambison as the Warwolf Gloves did, but so far they haven’t been bothering me, so that’s a good sign.

Boots proved tricky. As per usual, I wanted thighboots (especially since I was sticking to the core of the last look still), but casters have never really had a lot of great options there. The Scion Healer’s Highboots were out—without the red to go along with the soles on them, they weren’t the best fit (and naturally, neither were the Antiquated Duelist’s Thighboots). For dyeable or black options, the choice came down to the Expeditioner’s Thighboots (which have the right heft but that annoying dagger), the Adept’s Thighboots (which a great in style but too thin), or the Shire Philosopher’s Thighboots (good amount of weight but really awkward tops). In the end I went with the Expeditioner’s staple but I’m not 100% happy with them, and I’m hoping we’ll see some new caster thighboots in 4.1.

For now, I’m going with nothing for the headpiece—I’m not a huge fan of glasses with the Gambison (or for Red Mage in general, really), and I think I’d still prefer some sort of hat, but that’s probably going to have to wait until we can dye the Duelist’s one or we get something new, as nothing that’s currently available really felt like a good fit. Everything here will do for now, I think, though. The real rub is that I think going back to white and black is going to have a ripple effect on the rest of my glamours, but we’ll see…