I finally got Bard to 70 toward the end of last week. Since I’ve been taking things a lot more slowly in Stormblood than I ever really have, I was really excited to get there, as I’d been sitting at 67 when I left for vacation. The anticipation was killing me! I’ve really been enjoying the class, since it feels like a more engaging version of the original level 50 Bard from A Realm Reborn, and I wanted to know if it could compete for the spot of my secondary DPS at the level cap. Once I finally got 70 and did my final quest to unlock Refulgent Arrow, I needed to worry about gear. I didn’t want to go spending Creation on Bard or loading up on crafted gear before trying it out with that final skill, which meant throwing on whatever random Arhat pieces I had (along with some pieces bought with extra Verity) for a trial Expert.

Of course, I couldn’t go into battle without some personal touches via glamour, either, and as usual, I didn’t want to just go back to the glamour I used while leveling. I liked the Arhat Togi as soon as I equipped it, so I thought I’d put something together centered around it, and here we are! 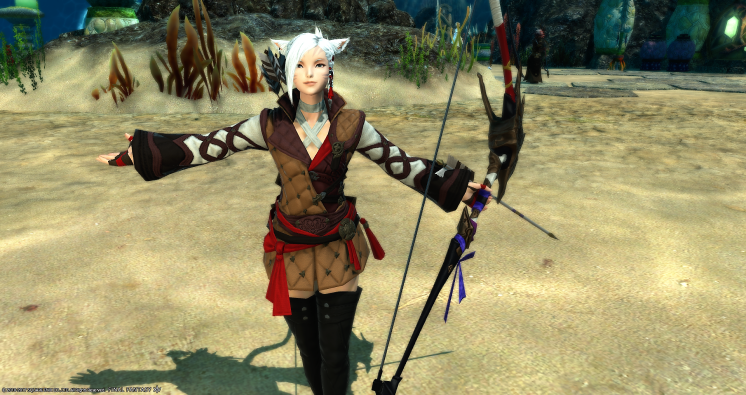 Of course, the first thing that stuck out to me about the Togi was the red cloth, which immediately suggested the staple Scion Healer’s boots (even my S.O. is making fun of me for them now—Alahra “never takes them off,” she says). Had I not been eager to get going with Bard, I might have hunted around for something different, but the boots work so well that I have a hard time turning down any opportunity to use them. (And, I have to admit, I’ve got another Bard glamour coming down the pipeline that also features the boots: sue me!)

Normally, for a look like this, I would have gone with the Makai Markswoman’s Quartertights, but those ended up adding too much black, given that the body itself features very little itself. Dyeing them didn’t work, as there’s not a really good match for the brown on the Togi, and something like the Light Steel Subligar felt too small here. The Guardian Corps Skirt was a better match color-wise, even if it’s not an exact match to the leather on the Togi.

The gloves and head piece were pretty straightforward. I picked up the Ala Mhigan gloves because I didn’t have anything level 70 to use, and I’ve always been fond of fingerless gloves for Ranged DPS. I also didn’t want to cover the sleeves on this one, since they have a nice pattern going (and they’re also the style I wish featured on other similar tops, like the Rainbow Shirt of Scouting or the Fuma Koromo). The Augmented Choral Chapeau that stayed with me for most of my Bardic journey to 70 had to go for this one, since it just seemed out of place alongside the Togi, and the Circlet was an easy fit here.

This one’s actually already been replaced (and I’ll probably post it in a few days, we’ll see), but I liked it enough (and liked the Togi enough) that I wanted to put this one up. With time, I might come back to the Togi, too, as it rather matches the sort of eastern gear I imagine Alahra actually favors in a role-playing, in-character sense.