I’ve gotten a little burnt out on Scholar, so when votes came up for Healer, I decided I would play around with a job-specific glamour for my other two healers which are still 60. Since I’m probably most likely to enjoy Astrologian as a healer over White Mage (I’m most comfortable with barrier healing), I saw an opportunity: I’ve wanted to use the Welkin Breeches since 3.0. Astrologian will probably be the healer I try out next, so I thought, why not give it a whirl. The process turned out to be a bit tricky due to dyeing issues, but with some persistent experimentation over a period of a few days, I managed to get something I’m really happy with! 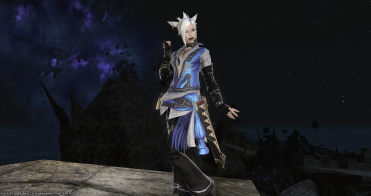 I started out planning to dye the Welkin Breeches Pure White, drawing inspiration from one of my recent Caster glamours that I’m still really enamored with. That ended up being a bit troublesome, though. The blue sash on the Breeches was really screaming for something to play off of, either in the body piece or the gloves, but the best body pieces I could find for the look in white were monotone (either the Hempen Camise or the Gryphonskin Breastguard). After awhile, I gave up on white and decided to go with Jet Black, which is often easier to “blend” with other pieces (and also made me feel less compelled to match the blue in the sash, which led to using the Hempen Camise in black for awhile).

The Camise wasn’t a perfect fit, though…it was missing something that I really thought the look needed. I’ve always favored Astrologian glamours that have a sort of “traveling fortune-teller” vibe, and that reminded me of a long time ago in 3.0 when I used to use the Holy Rainbow Shirt for my first level 60 Astrologian glamour (Astrologian was actually my second 60, as I thought back then it would replace Scholar as my secondary). I resisted using it though, because the only shade of blue that was similar enough to the sash on the Welkin Breeches was Metallic Blue. It looked awful in the preview windows, and so I felt stuck for a little while.

Before I ultimately settled on the Holy Rainbow Shirt, I picked up the Augmented Hailstorm Coat, which looked a lot better in Metallic Blue judging by the preview window. Since it just so happened that the cheapest option for the dye was a pair of two pots, I got the second one so that I could also try out the Shirt again. The Coat was a bit too extravagant, so I threw some dye on the Shirt and found that, once it was in natural lighting, it actually worked really well. From there, all I had to do was dye the glasses to match, and I had a glamour!

I like this one enough that I’ve actually been working on Astrologian a little. I’ve been getting way more distracted than I did in Heavensward, and it’s really killing the number of 70s I have, but at least I’m having fun!