Getting Lynahra to 60 on Samurai took awhile. Vacation got in the way, as well as a lot of other diversions (like treasure maps and some deep dives into Palace of the Dead). Part of the time in Palace of the Dead was spent on her Samurai, though, which pushed me close enough to 60 that I felt the urge to push through and cap things off. As I normally do when I hit a milestone like that, I needed to create a new glamour for her to celebrate the occasion, and the first thing I thought to use was the always-cool Shire Pankratiast’s Jacket.

My first thought was to do something like a color-variant of Alahra’s Shire glamour for Monk, but the sort of standard (shorts and a pair of thighboots), something didn’t seem right about it for Lynahra. She doesn’t have the Makai Quartertights, though, so that might have helped, but neither the Lady’s Knickers nor the Guardian Corps Skirt seemed to work with the Jacket. That led me to actually using pants with thighboots for once! 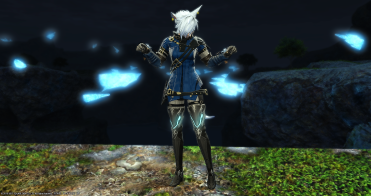 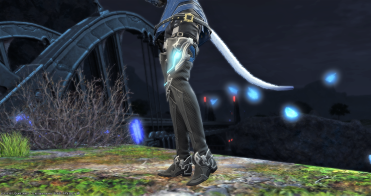 I’m generally a fan of symmetry in glamours, and with the Allagan Gauntlets leaving just a sliver of grey on the upper arm of the Jacket, I really wanted to have something like that somewhere else in the look. That meant the best option was the Shire Hose to go along with the Jacket. Paired with the Ironworks Sollerets, they end up providing a similar “gap” between the top and the boots that does exactly what I was looking for. I’ve been wanting to use some variation of the Shire legs (basically for any job) for a long time, and I’ve never really been able to come up with a look that showcases them. This one doesn’t really do that, either, honestly, but despite how much I like them, they’ve proven really difficult to work with.

Outside of the body and legs pieces, everything about this largely stayed the same as it was for Lynahra’s last glamour. I’ve not found a katana that I like more than the Ironworks Magitek blade for her, which meant sticking with the Ironworks blue thing she had going on last time. If there’s one thing I’d consider changing, it’s the Gauntlets. They don’t quite gel with the Jacket, but they were the best option Lynahra had access to when I put this together (and at least the gold accents pair up with the same on the body piece). I’d like to try out the Ironworks Armguards, but since she still needs Poetics to finish gearing her Samurai at level 60, I don’t want to spend the currency to get them yet.

All in all, I actually think Lynahra looks better in the Jacket than her sister does—she’s somewhat taller than Alahra, which makes some of the bulkier body pieces fit her better (which is nice for tank armor, too). Looking ahead on the journey to level 70 (which will likely be a fairly slow process for Lynahra), nothing jumps out at me that she might use, though I could perhaps see the Gazelleskin Corselet as one option (and as with the Jacket, I think it might work better for her than it does for Alahra).