As I mentioned at the end of the Scholar glamour from last week, I had a new glamour ready before I even got around to putting that one up on the site. That happens regularly while I’m leveling, since I obsessively collect gear from leveling dungeons for every role and tend to end up with new gear every couple of levels. Sometimes, I just glamour everything from the last glamour again, but just as often, I’ll use the new gear as an excuse to put something new together.

This time, I hit 67 and pulled out the Yanxian Healing gear, and the Togi made me remember the original Asuran model which I had always liked but never gotten around to using. It’s one of the few pieces of eastern gear I’m actually fond of on Alahra (which still frustrates me), and I very briefly used it in early Heavensward as an in-between look that never became a full glamour. For kicks, I wanted to give it a little time in the spotlight before I hit 70 and started playing around with the new Scholar Artifact Armor. The work wasn’t especially difficult, given that the Dogi is a full on robe, but I still had fun with it anyway. 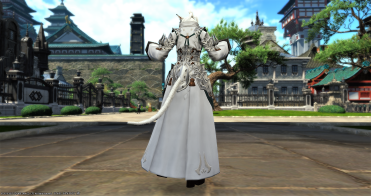 It’s really rare that I like the “metallic white” that we get on most items with metal, but something about it works on the Asuran Dogi for me. It’s also really rare that I use robes for anything at all, with one of the only other ones I remember liking being the classic Vanya Robe from 2.0 (that one is part of why I ultimately decided to level Scholar, actually). The Dogi works mainly I think because it’s fairly slim all around, which keeps it from ballooning out in strange ways because of the wide idle stance for miqo’te females.

Choosing other pieces to go along with it wasn’t too difficult, since I didn’t have to agonize over a leg piece to complete the look with the body itself more or less being the look. I mainly threw the tights on to have something in place while in motion—they’re almost never visible otherwise. The Claws of the Beast are standard for Alahra’s Disciple of Magic glamours, and they had the advantage of not clashing with the sleeves of the Dogi, which I actually quite like (another rare thing—I normally really dislike flared sleeves!).

The Marid Leather Boots were a new find for this one. It’s rare that I want shorter boots (and I normally wouldn’t have used them here either). I happened to try them on while pondering what footwear to go with and really liked the heel they have. Their natural color scheme also provided a nice neutral option to go along with the Dogi, and I think I’m going to keep them in mind for future glamours when I need something shorter (even if that’s really uncommon).

The final piece, the Ironworks Optics, ended up being the finishing touch. I wanted a circlet or something originally, since my standard Elegant Rimless Glasses didn’t really jive with the Dogi’s style, but finding good ones is tricky. I thought perhaps the Koppranickel Temple Chain would work, but it looked strange (probably because of Alahra’s hairstyle). I tried the Optics the next day, and something about their shape really paired well with the armor on the Dogi, so I decided to go with that.

I’ll likely have another healer glamour sometime soon, since I did hit 70 over the last weekend. I’m not especially excited for most of the Orator’s gear, but the Bottoms will demand some experimentation!