Since I’ve been largely taking a break from the game, mainly logging in to take care of Creation capping for the time being, I haven’t really been working on Lynahra for quite awhile (and that’s likely to continue a bit once Patch 4.1 launches, but we’ll see). That’s meant that while I’ve had an idea for a new glamour for her, I haven’t gotten around to actually putting it together. It didn’t help that the items I wanted were a bit expensive, and I’m trying to keep money put aside to gamble for housing on Balmung come Tuesday.

But, I got the itch to finally make the glamour, so I dropped more gil than I should have getting several items for her. I suppose I could have saved some by making all of the items on Alahra, but transferring things between alts is always such a pain, and the thought didn’t really occur to me until I had glamoured the items. All’s well that ends well, though. I have enough money to pick up at least a small house if I can beat the queue lottery, and I’ve got a new glamour to share! 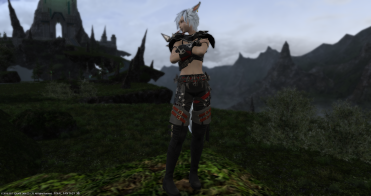 Outside of the money issues and not really working on Lynahra much, another thing that had really kept the glamour from coming together was boots. When I put together a similar look for her Warrior, I had a similar issue, until I tried out the Artifact boots from Warrior’s job specific Heavensward gear set. My original thought had been to more or less mirror that look (since the Striking version of the Harness is also red by default like the Fending one), but there weren’t any comparable boots for Samurai.

It didn’t help that the orange sash on the Striking Harness looked a little weird for Lynahra (especially with her light blue hair). The Harness looked great in black (as did the Breeches), but the Sky Rat Fingerless Gloves lose some of their character when dyed. As it turns out, though, this one came together very quickly once I started browsing the Market Board.

The Griffin Leather Bracers have been a common staple for Alahra’s Striking glamours for quite awhile now, and they just so happened to match the black and red on the Sky Rat pieces. They would normally suggest the Scion Healer’s Highboots, of course, but those seemed too narrow given the Breeches. Very fortunately though, the Sky Pirate’s Boots, an old favorite of mine, fit in more or less perfectly. The red on them is a slightly different shade than that on everything else, but it’s not especially noticeable, and their thicker style works much better!

Patch 4.1 is nearly here, and Patch time is always exciting when it comes to glamours. Hopefully, the new items we get open up a lot of great new possibilities, and with luck, whatever class changes are coming will be good for everyone involved. Best of luck to anyone going for housing in Shirogane, too (especially for those of us on congested worlds)! May the queue favor you and everyone else trip on the way to the placard you want!