I’ve not had much luck at all with drops for a few weeks now. I’ve been after the Skallic Jacket of Striking for quite some time and I haven’t so much as seen it drop, which has put my glamour plans for Samurai mainly on hold. I’ve had similar trouble with the Ivalician Fusilier’s Jacket, which I saw drop several times while going for Ninja pieces and haven’t seen once since I started looking for Bard gear. Last weekend, with the end of the weekly lockout looming, I cast lots for the Ivalician Samurai’s Dogi, just so I wouldn’t waste my weekly drop. Since that meant my last Samurai glamour was disrupted, I wanted to take the opportunity to do something new, even if I didn’t have the piece I was really after.

I’d been feeling red and black for Samurai again, so I naturally pulled out the Scion Healer’s Highboots and the Griffin Leather Bracers of Striking for a starting point. I also decided to keep the Skallic Bottoms of Striking from the last glamour, as I’ve come to prefer them over my previous staple, the Makai Manhandler’s Quartertights. From there it was mostly a matter of settling on a body piece, and ultimately, I settled on the Augmented Shire Pankratiast’s Jacket. 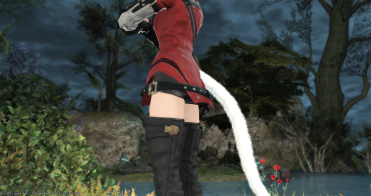 I didn’t want to use the Jacket very much, though, since I’d already used it in combination with the Bracers and Highboots. I considered a few others, like the Chivalric Coat of Striking, the Arachne Shirt of Striking, and even the Eastern Lady’s Togi (which I still very much want to use again someday). I thought about swapping in the Sky Rat Fingerless Gloves, as well, using the orange on them as an excuse to use the Inferno Katana, but the scabbard for the sword was a bit too ornate for the rest of the pieces.

In the end, I couldn’t find anything that really beat the Jacket, so I’ve stuck with it for now. Just for a little variety, I went with the Bandana over the normal Elegant Rimless Glasses. I rather like the way it pairs with black leather shoulderpad on the Jacket, and it provides for a different style than the one from the last time I used the Jacket for Alahra. For now, this look will last until I finally get the Skallic Jacket, which I’m really hoping to pick up this weekend. I’m about due for some luck by now!