On our last episode, I was foolish and predicted I’d be doing a Monk glamour with the Scion Liberator’s gear. I should really know better than to do that by now, since I nearly always end up getting a different idea from the one I expect, and this time was no exception. I’d been playing around with the Lyse’s outfit ever since I got it, and there are so many different ways to use the Jacket especially that it’s taken me forever to really settle on classes to use it for. I’ve got ideas for Monk (or maybe Samurai), for Bard, possibly for tanks, and even a few possibilities in mind for Ninja. The first one that I managed to get in a completed state ended up being Red Mage instead of Monk, even though my last Red Mage look was perfectly suitable.

Blame the Duelist’s Chapeau, I suppose. While I was working on the Monk glamour, it occurred to me that Red Mage’s Artifact hat would go perfectly with the Scion Liberator’s Jacket, and once the thought crossed my mind, I couldn’t get rid of it until I scratched that glamour itch. So, while I have a Monk glamour that’s mostly complete (and I’ll hopefully be able to show that one off soon, too), I had to put the finishing touches off until I figured out a Red Mage look instead. 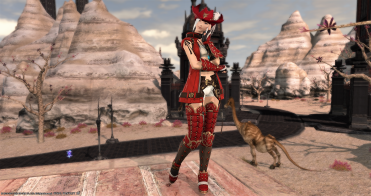 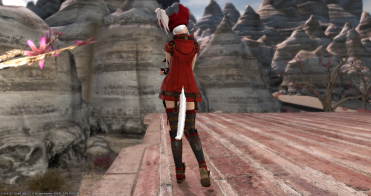 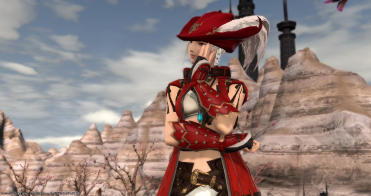 This one was actually pretty easy to put together, and I think I spent just as much if not more time trying to get that final header shot composed (which took so long the weather changed on me, but c’est la vie). With the Chapeau, Jacket, and Pantalettes set in stone even before I had begun, the only work I had to do was for the gloves and boots. I considered a lot of options because of how many things look great with the Liberator’s gear. Many of them are probably going to be showing up over the next week or two, so I won’t go through the whole list here.

For Red Mage, though, I did consider a couple class- or role-specific options. The Marid Leather Gloves of Casting work really well with the Jacket, since they have bits of gold that stick around when dyed red to match the buckles on the body piece. I also thought about using the Antiquated Duelist’s Thighboots, but something seemed off, at least in this case, with a pair of black boots, since I didn’t have a good pair of matching black and red gloves to use.

The Amatsu pieces I ended up using have normally been a Monk-only thing for me, but one thing I’ve wanted to do for quite some time was a Red Mage glamour with at least a little bit of an Eastern vibe to it, given Alahra’s in-character love of all things Doman. The Amatsu gear works well with the Liberator’s pieces, which is no surprise since both sets have lots of gold, red, and white for their main colors. Given that the Maiden’s Rhapsody event ran again recently, it seemed appropriate enough to use the gear from the event again, too.

Sadly, I don’t think I’ll be getting much use out of this one for the time being, since I’ve got far better geared classes than my Red Mage to use for Experts and the like, but I really like it. Without question, the Scion Liberator’s Attire is probably my favorite thing on the Mog Station right now—my opinion of it has only risen since I wrote my review. I’ll try to keep the glamour spam for it spaced out though, I promise!