I’ve been spending a lot more time with Ahrane lately than I have in the past (for roleplaying at least; I’ve still done almost nothing with her gameplay wise), and for most of it, her last glamour has been bugging me. While I like the overall look, something about it has started to feel off, and so the last time I was preparing for a scene, I spent a little bit trying on what few things she has access to, wondering if something new would catch my fancy. At first I thought about going back to the Astral Silk Robe, which is what I used for her originally when she was little more than a level 1 green leaf I used sparingly for character development stuff, but it felt slightly too stuffy after she’d been in the Eastern Lady’s Togi for so long.

Most of the other things she has access to (outside of going through the hassle of transferring things from Alahra to her—will we ever be able to mail our alts?) are various account-wide pieces, like Veteran Rewards or—most importantly for this one—the special Amazon promotion items. On a whim I put the Eastern Journey Jacket on and found that it worked really well with the Star Velvet Hood that she wears most of the time, and a new glamour was born. 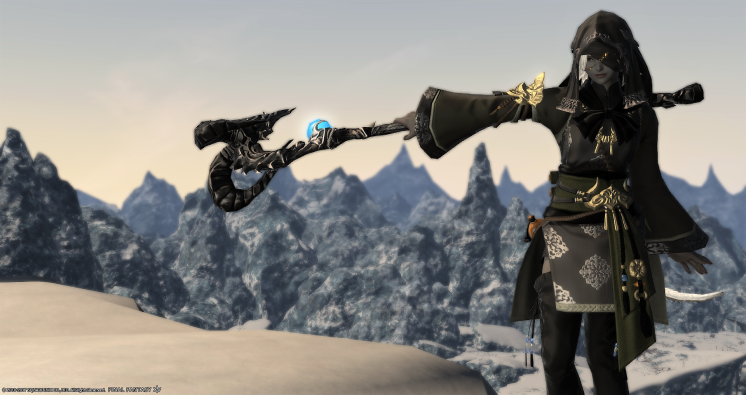 Since Ahrane’s options are fairly limited, I opted to keep the two Star Velvet pieces, which also meant there was no reason to move away from her Halfboots, either. Since the sleeves on the Jacket don’t play well with gloves (they hide everything that I’ve been able to find, even longer gloves like the Star Velvet ones), I didn’t get to really experiment with much. I settled on the Eastern Journey Armlets mainly because she doesn’t have the Claws of the Beast, and they provide at least a little bit of jewelry even if the main part of the armlets aren’t actually visible while wearing the Jacket.

This marks the first time I’ve used any of the Eastern Journey pieces in a glamour, and continues something of an interesting pattern in which Ahrane has gotten more mileage out of two special Eastern sets of gear than Alahra, despite the latter character having an in-character fondness for the Eorzean Far East. That makes a certain degree of sense, since Alahra’s Doman fascination is in part due to time her mother spent in Doma when she was very young. So far I’ve liked both the Lady’s Togi and the Eastern Journey Jacket far better on Ahrane than I did on Alahra, probably due to how much taller she is (she’s max height), though I don’t think any of the other Eastern sets will really be her style.

I’ll have a tank glamour up for Ahrane sometime soon as well, as I recently jumped her Dark Knight so that she could have better glamour options for a prequel story I’m doing where she hadn’t really picked up thaumaturgy yet, too. I actually got that one put together first, but I’m not quite happy with every one of the pieces involved, so I want to spend a little more time experimenting before I put it up.

Before I close out for today, I’d like to take a brief note to thank all of Fashion Ninjutsu‘s Patrons. Today, support crossed the threshold for the main goal of the site’s Patreon, which was to get rid of those ugly advertisements! The next goal is more for fun, and will involve Patrons voting on Fantasia swaps for a special Glamour Spotlight each month, so if you feel like torturing me by voting for male miqo’te every month, you can do so by contributing!