I mentioned a couple posts ago that I had a tank glamour in the wings for Ahrane, Alahra’s mother, which is a really great thing, since I’m currently obsessed with Lyse’s gear on Alahra, and this lets me break things up a bit! Canonically, in the present day, Ahrane is in her 50s (I’ve never settled on an exact age), but in her youth, much like both of her daughters, she served as one of the Valkhir tribe’s hunters. I’ve been doing occasional RP to fill in some of her backstory from when Alahra was young, and because I wanted things to be “period accurate,” she needed to be able to wear some melee gear for that.

Before jump potions were unlocked, I was using the Light Steel Galerus and Subligar for her with some sort of low level tank gear that I don’t remember, since my conception of the tribe’s hunters includes them usually wearing very light armor. There aren’t a lot of good options for that, and I really wanted to get her to 60 Dark Knight for more variety. Ultimately, I want to farm up the set from Sohm Al, as I want her to have the body piece from there, but I haven’t had the time to devote to that yet. So, I needed to put together something for her to get her out of the very bulky Shire Custodian’s gear. 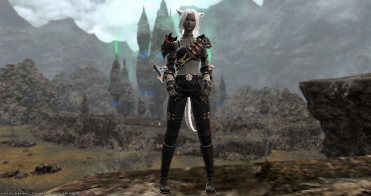 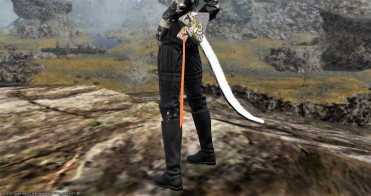 As I’ve likely demonstrated by tank glamours for both Alahra and Lynahra, I’m pretty fond of the Sky Rat Harness for tanks—it’s probably the closest thing in the game at present to what I imagine Valkhir hunters wear (though I could do with out the giant shoulder pad and the canister things on the front). I would have liked to find something different to use for Ahrane, but especially because of the role-playing motivation here, it was hard to put her in any other sort of armor. Even with that however, I did spend awhile looking for other options.

What truly sold me on the Harness was that the gold on it matches up well with the gold buckles and studs on the Shire Custodian’s Hose. I’ve always really liked the various Shire leg pieces, but I’ve had very few opportunities to really use them. For Ahrane, I liked them a lot better than the Sky Rat Breeches I use for Lynahra’s Warrior glamour. I almost had to give up on them, though, as finding a pair of boots that worked alongside them was a total pain.

I started out with the Expeditioner’s Thighboots, but those covered the cooler parts of the Hose, as did most other decent-looking sabatons for tanks that Ahrane has access to. Eventually, I settled on trying to find a shorter pair of boots because of the sort of leather reinforcements on the calves of the hose. They sort of look like boots on their own, and I thought that if I could find the right pair, things would blend in and look like a pair of tallish boots. The High House Halfboots were the first thing I tried, but they seemed far too narrow overall. The Sky Pirate’s Boots of Fending didn’t really match the textures on the Hose, and the High House Boots were too wide to really blend in. The High Summoner’s Boots ended up having just the right texture and height, so I’m still pretty glad I swung for one of the FanFest streams last year.

When it comes to other glamours, I’ve been slowing down on runs of Expert and Royal City, since we’re nearing the end of this raid tier and I have most of the gear (statwise, anyway) that I want. I’m still after several of the Skallic pieces, of course, but I actually didn’t cap Creation last week for the first time since early 2015 when my PC died. Without the presence of a relic weapon to really make gearing a new job exciting, I’ve decided to relax and not worry so much about the weekly grind for awhile. That’s been strangely liberating, but it’s also driving home how sparse the game is with things to actually do. I hope Eureka really reinvigorates things.

I still plan to put in some effort toward getting Skallic things for glamour though, and hopefully I’ll have some soon, so that I can get a bit more variety back into my glamours, as much as I love Lyse’s Stormblood outfit.