Good news everyone! It’s taken way too long for this to happen, but I got one of the Skallic Jackets I was after! While I was hoping to pick up the Striking Jacket first, I finally saw the Aiming one drop in a run over the weekend while I just so happened to be on Bard. As soon as the run was over, I started pondering glamour possibilities with a level of excitement I haven’t  had in some time, since picking up new pieces of gear has actually been somewhat rare for me during Patch 4.1.

As always, my first thought was to pair the Jacket with the Scion Healer’s Highboots, and I dyed the Jacket Dalamud Red right away, thinking I wouldn’t have to figure out anything else after that point. In the end, though, I wasn’t really happy with glove options to go along with the Highboots for Bard. My next thought was to go with Jet Black, using the Bogatyr’s Gloves and Thighboots combo, but neither of those pieces really seemed to fit in with the Jacket well.

Of course, I did most of this while wearing my last Bard glamour (except for the Skallic Jacket, of course), and after a little bit, it dawned on me how well the Expeditioner’s Thighboots worked with the body piece. After some adjustments to dyes and testing a few other pieces, I settled on the look for this Spotlight. 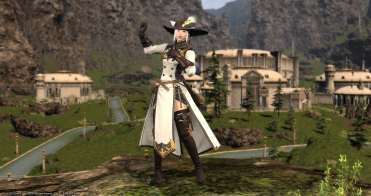 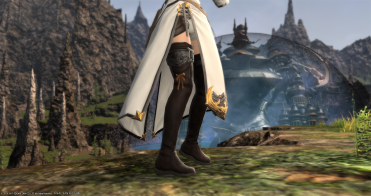 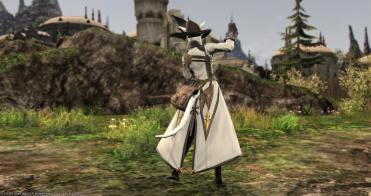 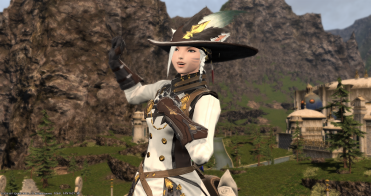 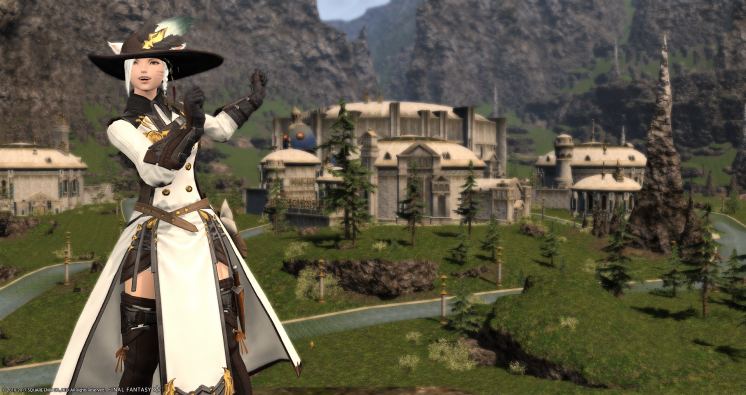 The Skallic Jacket lends itself pretty well to brown color schemes because it has a bit of leather, which is really what made the Expeditioner’s Thighboots a better fit than Y’shtola’s boots or the Bogatyr’s pair. From there, all that was left to sort out were the gloves and shorts of some kind (or maybe a skirt), since there was no way I was going to give up the Choral Chapeau.

For the legs slot, I mainly considered using the Miqo’te Loincloth or the Makai Markswoman’s Quartertights, neither of which seemed to be a good fit for the Jacket and Thighboots combo in brown. Lyse’s shorts ended up being a much better fit, so I’ve not gotten completely away from her Mog Station set here, but little steps are important, right? Maybe the next glamour for Bard won’t have any pieces from it! It could happen!

Gloves were a little trickier, as they often are for Bard. While the sleeves on the Skallic Jacket aren’t especially bothersome to me, I still thought that things looked better overall with something in an over-the-elbow style. Unfortunately in terms of fabrics, the only good option for that were the Aoidos’ Shoulder Gloves, since the Oschon’s Gauntlets were too heavy, and most other options (like the Saurian Gloves of Aiming) just seemed out of place. The Aoidos’ gloves don’t play very well with dyes, though (at least not for a look like this one), which made them unworkable. Once I ruled out longer gloves, I tried both the Skallic Gloves of Aiming and the Antiquated Storyteller’s Gloves before ultimately settling on the Marid Leather Gloves instead.

With this one complete (for now!), my next goal is to shoot for the Skallic Striking Jacket, though I’d settle also for picking up the Fending Coat, too. I’d also like to collect the Healing Jacket at some point or another, but I’m less certain of how well it will work with Alahra’s hair. Much like the Shire gear from the end of Heavensward, several of the Skallic pieces really work for Alahra (though sadly the Ninja one doesn’t), and in an ideal world I’d  have them all already. There’s still plenty of time before Patch 4.2, though, so hopefully by the time that rolls around I’ve been able to experiment with all of the ones I want!