For whatever reason, it hit me recently that even though I had gotten Black Mage to 65 quite some time ago now, I never upgraded its gear set to incorporate the Casting gear from Bardam’s Mettle. Doing so, of course, meant I was highly encouraged to come up with a new glamour, since the gear itself wasn’t glamoured coherently. I had plenty of thoughts about the direction to take a new look for Black Mage, but once I pulled all of the gear out of my retainer, including the weapon, the Eloquent Moon, I decided to work around the staff’s black and red color scheme, which is, of course, one of my favorite combinations for Alahra.

I’d been a fan of the weapon’s model for a long time, and the Scintillant Staff version played a huge part in the longevity of one of my favorite Heavensward-era caster glamours. That version never quite worked in red, so working with the new one gave me an opportunity to do something new with it. I figured I’d have an easy time of things since red and black go so well together, but finding the right combination of pieces actually proved to be a lot trickier than I thought it would. 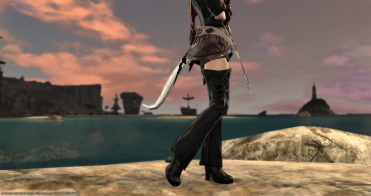 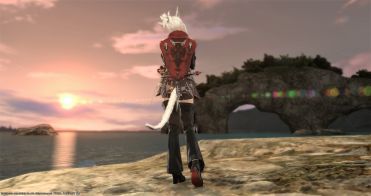 Casters actually have a lot of options for red and black gear, from A Realm Reborn’s Evenstar Attire to the Plague Bringer’s Attire from Heavensward and the aforementioned Nomad’s gear from Bardam’s Mettle in Stormblood, with tons of other pieces here and there in between. The tricky part has always been that a lot of that gear doesn’t quite fit Alahra’s style, though, with only the Plague Bringer’s Coat working well for her. I very nearly went with that, but I’ve always had something of a problem with the coat’s overall shape, so I wasn’t able to commit to it this time.

Outside of caster-specific gear, the Scion Healer’s Highboots are a staple for the color scheme, and the classy Scion Adventurer’s Jacket probably looks best in Dalamud Red. But try as I might, my usual suspects weren’t really clicking this time. After a few passes through my Casting gear retainer, I settled on using the Ghost Barque Coatee, and from there it took a lot of work to find workable choices for the legs and feet slots. For most of the process, I was intent on using some sort of tights, heavily considering both the Goetia Chausses and the Darklight Breeches of Casting. I couldn’t find boots that I liked with those, though, and there were some difficulties in figuring out the right shades to match everything else, too.

In the end, it was the Star Velvet Bottoms that came to the rescue. They work well alongside the Coatee, and with the Evenstar Boots, allow for red on the bottom half of the look without really going overboard, which is important since the rest of the look is predominately black. I went with the Warwolf Gloves after those two pieces were settled to allow for some more red and black without having to go elbow-length (which doesn’t work so well with the Coatee), and of course, the glasses were pretty much pre-ordained for a Black Mage glamour.

That’s all for this one, I think. We’re getting ever closer to 4.2, and hopefully we’ll start getting more information soon, as this content drought is starting to feel very long. Even as someone who runs a FFXIV glamour blog, I can’t survive on glamours alone. I need stuff to do!