I recently set up a screen saver on my PC to cycle through my FFXIV screenshots folder, which has naturally ended up being something of a glamour roll, since so much of the folder is taken up by screenshots I take for the site. That’s proven somewhat useful already, as it provided me with a bit of inspiration—reminding me how much I liked the boots from this glamour—which prompted a glamour session that I thought would result in a new Ninja glamour. As you can no doubt tell from the post’s title and the header image, that didn’t actually happen, but were it not for that initial inspiration, I probably wouldn’t have gotten to this new Samurai glamour.

After fiddling with the Shire Emissary’s Thighboots for a little while, I decided to switch gears since nothing was really jumping out at me but I still had the itch. While I don’t remember exactly how or why I decided to build something with the Brand-new Tabard, I got to have a lot of fun, as it turns out there are a number of pieces for Samurai that really work well alongside it. That was pretty convenient, since Alahra’s been in need of a new Samurai look for awhile (a thorny problem since I still haven’t gotten the Skallic Jacket). 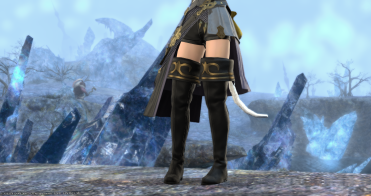 I’ve only ever used the Brand-new Tabard for one glamour, so it entirely slipped my notice just how well the Allagan Gauntlets work alongside it. Once I saw the combo in game, I decided I had to work out a full glamour for it. While this version of the Tabard is generally a much better fit for Lynahra, I’m still very happy with her current look, and so I decided to put things together for Alahra instead (which probably worked out for the better since she’s higher level and has access to more stuff).

Everything came together fairly easily for this one. I retained the Skallic Bottoms here rather than going to something like the Makai Manhandler’s Quartertights, since they’re less bulky, which fits the overall slim profile of the Tabard very well. The boots were marginally tricky: I started out with the Expeditioner’s Thighboots or Direwolf Thighboots of Striking in mind, but they lacked any gold bits, which seemed necessary to work alongside the Tabard. The Gyuki Leather ones were basically perfect, though, and I didn’t bother looking at anything else after I realized how nicely they fit. I stayed away from using any sort of head gear just to do something different (I probably would have used the Ala Mihgan Headband of Striking were it not for the “tail” on the back, which looked plain silly with Alahra’s topknot).

Of course, I’m still hoping to get the Skallic Jacket soon, so in an ideal world this one won’t last very long. I even did a run of Drowned City before I sat down to write today’s post to see if I’d have any luck (and, spoiler alert: I didn’t). The Healing Jacket did drop, but unfortunately the healer in the group rolled Need on it, so I didn’t get that either! At the rate I’m going I may not see the remaining pieces I want from there before Patch 4.2!