Lately I’ve gotten pretty interested in exploring different styles of boots for Alahra, since Stormblood hasn’t really expanded our range of available thighboots very much.  The most notable new ones were the dyeable Tigerskin recolors of the Orthodox/Dravanian Thighboots from Heavensward, and outside of those we’ve gotten one or two new pairs (with the Gyuki Leather Highboots being one of other pairs of note, even if they’re limited to Striking and Scouting classes). We’ve gotten a lot of nice shorter boots, so far this expansion, though, and I’ve often been experimenting with them while working on other looks, which has also gotten me to look back on some of the pairs from the past that I haven’t used very often.

Today’s glamour is a result of my realizing that despite the very first healer glamour on the site featuring the Griffin Leather Boots of Healing, I’ve never actually used their Casting counterpart. That thought stuck in my head so much that even though I had a glamour ready to post for today, I spent some time trying things out with the Griffin Leather Boots of Casting so that I could post something with them today instead, and I have to say that I’m pleased with the result (but I suppose, if I weren’t, I wouldn’t be posting it, would I?). 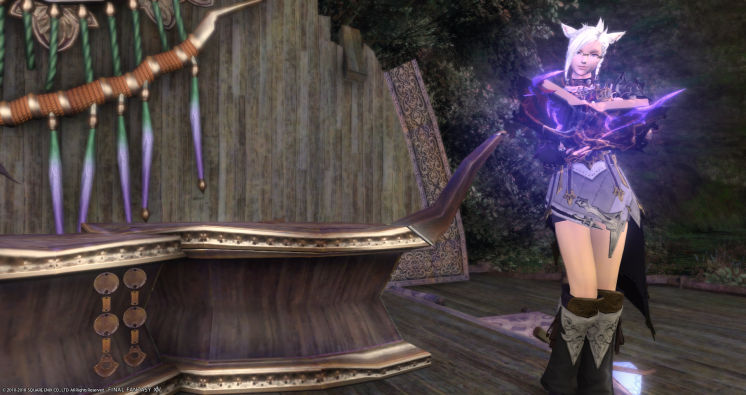 Like the Healing version of the Griffin Leather Boots, the Casting ones maintain the color of the leather on the actual boot, visible mainly on the toes and from behind. Unlike the Healing ones, where that portion of the piece is black, on the Casting ones, that part is purple, and that meant I was somewhat limited in color choices for other pieces in the glamour. Purple isn’t a color I use all that often for Alahra, though, so I didn’t really mind the limitation, and besides, sometimes limitations help guide the glamour process!

I knew I wanted to go with some sort of skirt from the start, and I started out with the Brand-new Waistwrap, since casters are somewhat limited in their options in that department. Its sort of blue-grey can’t be replicated with dyes, though, and I quickly moved on to the Werewolf Tail instead (since I didn’t feel like farming up the Acolyte’s Skirt), which seemed like it would fit well with the fur aspects of the Boots.

From there, I needed to find a top, and the primary contenders were the Eikon Leather Corselet and the Serge Gambison of Casting. You can tell which one I ended up using, of course. The Serge Gambison had too much black on it to really work with the Boots—unfortunately enough, given role-locked pieces, the Casting Gambison would look great with the Healing Boots in this case. I was pretty happy to have another opportunity to use the Corselet though, since it’s a piece I’ve always liked that that I’ve not used nearly enough.

The last piece of any consequence ended up being the gloves this time, and since gloves are one of the main reasons I haven’t actually used the Corselet much, I was very happy to find that the new-in-Stormblood Tigerskin Armguards work really well alongside the Corselet in addition to already being naturally purple and black, just like the Griffin Leather Boots. Once everything else was in place, I went for the Reading Glasses to key off of the metal bits on the Corselet. I did consider dyeing them Dalamud Red to match the red on the Ramuh book, but since there wasn’t red anywhere else on the glamour, that didn’t really work.

We’re getting ever closer to 4.2, and with the next Live Letter coming up soon, I’m hoping that we get to see some new gear and also hear a lot about Eureka. In the meantime, I’m going to largely be experimenting with glamours and making an effort to try things I wouldn’t normally use, since I feel like I’ve been in a glamour rut lately. Of course, I’ll make exceptions if I can manage to get some of the Skallic pieces I’m after…but with the way my luck’s been, I probably won’t have to!