I’ve been very lazily leveling Monk lately, which is now a run of Bardam’s Mettle or so away from 67 and Doma Castle. In the process, I discovered I wasn’t very happy with the last glamour I’d put together with it (which is a little odd, since I would have thought Lyse’s gear would be a perfect fit for Monk). Something about it just didn’t seem like it came together as well as some of my other glamours with the Scion Liberator’s Jacket (with the ones I did for Ninja and healers really sticking out as better to me), and so, I wanted to do something new.

And sometimes, when I make that decision, I’ll more or less have an entire glamour form in my head when I’m not even on the game. This one came to me (somehow) while I was watching the Hearthstone World Championship this weekend, without even needing to be looking at gear or anything on FFXIV. I think the issue I was facing for the last glamour I had been using is that it didn’t seem very Monk-like, and most especially with Monk I’ve often gone with thematic glamours for Alahra since she’s canonically supposed to be some sort of martial artist. 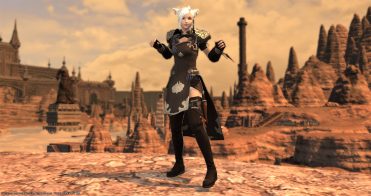 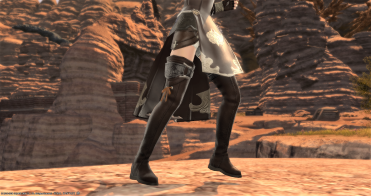 Before I ever sat down to finalize this look, I knew I wanted to use the Temple Cyclas in some shade of brown with the Scion Liberator’s Pantalettes and the Expeditioner’s Thighboots. The Cyclas is something I’ve always really liked on Alahra (which is probably no surprise since it’s featured in a couple other glamours on the site), and I thought the Pantalettes would look good with it, using Alahra’s white hair to “match” them with the Cyclas in match the leather on the shorts. Going with brown for the body suggested using the Expeditioner’s Thighboots almost immediately.

That left me with only two things to decide, both of which proved to be very easy, since I already knew the overall profile I wanted for the look. I knew I wanted to get away from the Replica Allagan Gauntlets for this one, since the Cyclas looks much better with shorter gloves. The now staple Sky Rat Gloves were more or less perfect (though there are probably tons of other reasonable options). Another staple, the Scintillant Circlet, added just a little flair for the head piece, since I didn’t want to use glasses for this and the Augmented Temple Circlet seemed like it was just too over the top.

The resulting glamour will probably last me the rest of the way to level 70 on Monk, when I fully intend to make use of at least some parts of the Artifact Armor for Stormblood, which is a plan I’ve had ever since we first saw it in the expansion’s Benchmark cinematics. That look might necessitate a return to Alahra’s original hair just for a little while, but I’ve gotten so attached to Minfillia’s hair I don’t know if I’ll be able to pull that off!