Slowly but surely, I’ve been updating titling conventions across the site to make separate posts more clear on search engines (which is something I’ve done like three times now—hopefully this is the last time I have to do it!), and it’s been interesting to note that roles I don’t play as much tend to have more glamours than ones I do. There are reasons for that, of course. When it comes to tanks, I’ve often had trouble finding looks I like, which means I do a lot of glamours for them that I get dissatisfied with pretty quickly, prompting yet another new look. Something similar has happened with Casters, likely owed to my pre-Stormblood quest to find the perfect level 50 glamour on which to start leveling Red Mage.

I haven’t finished tallying all of the jobs and roles, yet, but so far, Casters actually have more glamours than anything else on the site (beating out both Scouting and Striking DPS). If there’s any role that may challenge that, it’s going to be Ranged DPS (or, more specifically, probably Bard, since I use the Augmented Choral Chapeau so often), but for now, I’ve done 31 glamours for Casters, with this post marking number 32. Of course, that’s not including job-specific glamours, since I’ve long been categorizing those separately. Casters tend to be rather fun to work with, of course, since they tend to get a lot of really nice looking pieces, so I’m not especially surprised I’ve done so many.

Today’s glamour, which I put together for my Red Mage at 70 (since I wasn’t fond of the look I put together for Black Mage not long ago), very nearly works for all jobs, outside of a single role-specific piece (which also has a Healing equivalent). 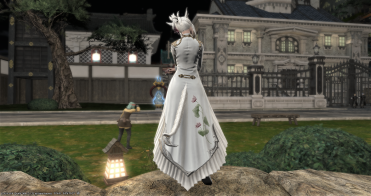 This one went through a lot of iteration, with every single piece ending up different from the ones I started with. I had two main goals when I began: I wanted to do something a little outside of my normal styles and to use the Eastern Lady’s Togi, which I’ve underused to a simply criminal extent. My initial attempt involved the Togi, the Makai Priestess’s Skirt and Fingerless Gloves, and the High Summoner’s Boots. Overall, the look ended up having too much White, though, as the Togi doesn’t have any other prominent colors.

I did like the overall idea of the dress with shorts and shorter-than-my-usual boots, though, and that got me pondering how the Ao Dai would look instead of the Togi. As luck would have it, the price of the mats for the Ao Dai have dropped dramatically on Balmung, so I was able to craft one without greatly damaging my wallet (something that’s important, given that a large chunk of my gil has been going to housing since the most recent Patch). I’d been considering using it for a very long time, but given the cost and that I wasn’t sure exactly what to do with it, I’d been waiting—and waiting in this case definitely paid off!

With the flowers on the gown, I had a little more to work with in terms of color, and the Brightilly Corsage seemed to work really well. It also solved another problem I had been having with the Togi in that I couldn’t find a good accessory for the Head slot. With just that hint of color, I thought it wise to put some color on the Claws of the Beast as well (which replaced the Makai Priestess’s Fingerless Gloves because of the Ao Dai’s long sleeves). After that, I swapped the Far Eastern Beauty’s Boots in for the High Summoner’s Boots, since the simpler boots didn’t look as nice with the Ao Dai.

The last change, from the Makai Skirt to the Astral Silk Bottoms, was necessary because the more casual look on the Skirt looked out of place with the Ao Dai. Alongside the Togi, that wasn’t as noticeable, but the Ao Dai shows off a lot more leg! I would have much preferred to go with the plain Lady’s Knickers (White), but as usual for those, they don’t match Pure White very well, and that bothered me more than the more elaborate styling of the Astral Silk Bottoms.

Though it’s not pictured, I went with the Manipulative Moggle Mogfoil for a weapon, since the color fit in well enough to match the flowers on the Ao Dai (even if it’s not a perfect match). Everything together makes me wish I played Red Mage a little more often, but with my focus likely locked onto Monk and Ninja for the foreseeable future with Eureka on the horizon, I don’t think I’ll get to use this one very much. At the least, though, it’ll give me a really nice outfit to wear for idle situations, too!