I used the Chivalric Doublet of Healing for my Astrologian and Scholar numerous times throughout Heavensward, and it’s been featured in a few different looks on the site already. After I put together a Red Mage look with the Casting version of the Doublet, I started thinking about using it again for healers, since I’m still really fond of it. Many of the looks I’ve put together with it haven’t lasted a long time, outside of my initial attempts in Heavensward where I was somewhat more focused on leveling classes and the new content than I was on glamours.

When I got Astrologian, which was my first Heavensward healer, to level 60, I’d developed a strong preference for the Serpentskin Fringe Boots, and for a long time I ran around with those and the Chivalric Doublet as my glamour. There was always something kind of missing from the look, though, as the two pieces aren’t an especially natural fit together. Over time I moved toward other options for boots when I used the Doublet, but I’ve always had a bit of a soft spot for the Fringe Boots anyway. I’ve been going back and revisiting some older pieces I never used much lately, and it hit me that the Survival Hat would probably really complement the Fringe Boots alongside the Doublet. 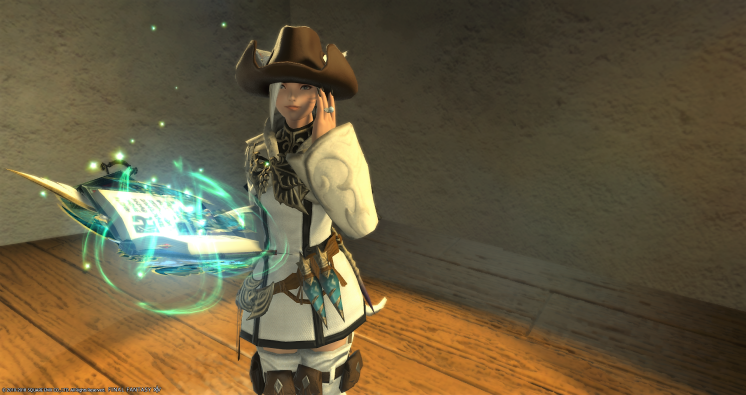 The look mostly popped into my head fully form, with the Survival Hat in Pure White, the Serpentskin Fringe Boots alongside my standard Valerian Smalls with the Chivalric Doublet. I put it together that way to start, but something just didn’t quite look right. I decided it was mostly a color issue—there was just too much white overall, so I needed to add some more color for the look to work. The first thing I added was the Tetrabiblos, which matches the vials on the Doublet, for a little bit more flair. I’d need to find other weapons for Astrologian and White Mage of course, but since they aren’t currently sharing gear with my Scholar, I haven’t gotten around to that yet.

Then, noticing the brown on the Doublet, I realized I should probably swap over to the Dhalmelskin Fringe Boots instead of the Serpentskin ones, since they have darker brown pouches for a much nicer contrast. Then, of course, I was pretty sure I needed to change the color of the Hat, too. Its default color actually lines up rather well with the pouches on the Boots. After I swapped to brown for the hat, I rather strongly considered using the Fringe Boots in their default brown and black colors, too, but that ended up being too much of a commitment to the brown, I think. So, I stuck with the white and brown look, and overall I think I’m pretty happy here!

As of writing, it’s not looking like I’m going to manage a new Monk glamour in time for Eureka, but there is still a little time left, so perhaps I will! Failing that, I’ve got a couple Patron Requests to work on, and I’d like to get both of those done soon! Those will probably be my next pair of projects, since I’ve hit a point where I’m at least temporarily happy with most of my other glamours. And then once I’ve gotten into Eureka properly (and hopefully picked up that Scorpion Harness remodel as soon as possible!), I’ll be doing a lot with the gear from there!