When I sat down to prepare for this post, I actually had an almost entirely different glamour ready. After I picked up the Anemos Duelist’s Chapeau, my natural inclination was to dye it Jet Black and go to Pure White town, updating my first level 70 Red Mage glamour to fit my preferred black and white color scheme for Alahra. After some experimenting, I ended up with a look that was a mix of that one and this one, with the Star Velvet Bottoms taking over for the Red Mage thighboots (since those don’t dye in a friendly way, since the red laces stick around). But I have to admit, I wasn’t excited, as I really wanted something a bit new…

And I found that, paradoxically, by giving into nostalgia a little bit (which is probably understandable given how nostalgic Eureka has been for me). While I was farming up crystals to start making the upgraded Red Mage pieces, I got reminiscent about the Scorpion Harness again, and I glamoured it over the Anemos Jacket I had been using for my most recent glamour for Casters. Naturally, for some extra color coordination, I added the Antiquated Duelist’s Chapeau, too. It doesn’t exactly match the Scorpion Harness in shade, but it was enough to really take me back to Final Fantasy XI, where Red Mages sometimes wore the Scorpion Harness (for soloing, I think, though I never got Red Mage to high levels back then myself) with their Artifact Armor.

While slaughtering Notorious Monsters, I started to really dig the way the Scorpion Harness looked with Red Mage’s melee animations as well—the slimmer profile worked rather well for fencing, I thought. I think that’s why the Serge Gambison kept bothering me, as it’s a much bulkier piece and ends up feeling a lot less graceful in combination with the melee combo. I finally hit my breaking point with the Gambison when I got in the spotlight of my portrait studio and in a snap decision, re-glamoured the Scorpion Harness. After just a little more fiddling around, I ended up with another glamour that serves as a bit of a throwback to FFXI. 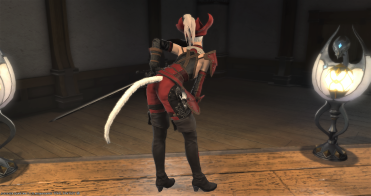 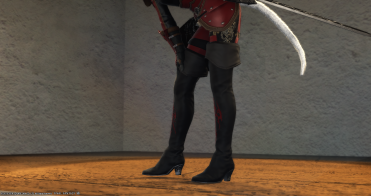 Though I had been using the Star Velvet Bottoms with the Scorpion Harness in Eureka, after I had them under the spotlight, I decided I need something with some more red, so I tried out the staple Scion Healer’s Highboots. I thought those looked all right with the Harness, and then I realized that, for once, I wanted a good pair of pants. I noticed when working with the Scorpion Harness for my Ninja tribute glamour that it didn’t seem to work with any available skirts or shorts (at least for Alahra), and that seemed to ring true here, too, especially with the tall boots.

I’d already experimented a bit with the Duelist’s Breeches in combination with the Serge Gambison before settling on the Star Velvet Bottoms, and while I couldn’t get them to work with that top, I did make a mental note that I actually rather liked them. I ended up coming back to them a lot sooner than I thought I would have, as they proved to be a great compliment to the Scorpion Harness. Once I had settled on using the Breeches, I decided to try out the Duelist’s Thighboots instead, too, since I was very clearly in Red Mage only territory. They’re shorter, which actually looked a lot better with the Breeches, and they’ve also got pretty nice heels to boot!

Initially, I was using Wine Red for all of the dyes, since the Scorpion Harness is mostly a darker red. But, the Duelist’s Breeches seemed to clash a bit in the darker shade, since the brighter red on the Harness is mostly centered around the waist area. So I moved to a mixture of Dalamud and Wine (with the Chapeau and Gloves still in the darker color, since the Gloves better matched the armguards of the Harness that way). Just to be thorough, however, I checked the gloves in Dalamud Red, too, and they actually end up mirroring the two shades of red on the Harness that way, which proved to be a better fit.

For whatever reason, the issues I had with the Harness on Alahra’s Ninja (that is, that it doesn’t seem to suit her more refined style) don’t seem to crop up when I use it here. I suppose having the Chapeau helps quite a bit, since it hides just how ornate her hair is. I always feel a bit weird using hats on Ninja, so it never really occurred to me to try one (though did briefly use the Orthodox Tricorne of Scouting in Heavensward in the days before glasses were strictly canon for Alahra). In the end, though, I’m really glad I decided to try the Harness again on a different job, because I had been a bit bummed previously that I didn’t think I’d be able to get lasting use out of it!

Now, if only it was dyeable…