My Red Mage is just about all set with Anemos gear now, with only two pieces remaining. But, since I jumped the gun on a Red Mage-specific glamour, the couple of pieces remaining ended up really disrupting the glamour for my Black Mage and Summoner. I don’t really play either of them, since if I ever need a caster for anything, I will almost always favor Red Mage. It’s still important to make sure they look good, just in case, though! I did have a minor limitation for whatever I decided to do, though: my Red Mage is still (as of writing, anyway) using the Lost Allagan Sabatons of Casting, which are currently glamoured to the Antiquated Duelist’s Thighboots, meaning my other casters are stuck with the Lost Allagan ones for the time being.

That wasn’t a huge problem, though, as it provided a starting point for inspiration, too. I’ve always been a huge fan of FFXIV‘s Allagan aesthetics, but I haven’t really dived much into using any of Stormblood‘s new Lost Allagan gear, outside of a single glamour for Ninja some time ago. So, I decided I should give that another go, because while I’m not a big fan of most of the Lost Allagan gear, I do rather like the Casting set. Thankfully, I had some Creation sitting around with no real purpose, so the natural thing to do was spend it on glamour pieces! 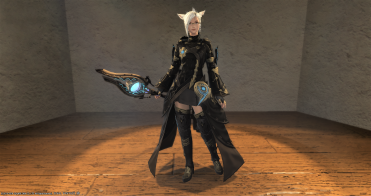 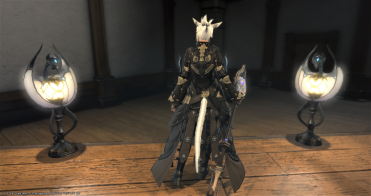 I had enough Creation to pick up the Lost Allagan Coat and figured that would be the centerpiece. Of course, coats of this sort really do dictate glamours, especially since the sleeves on the Lost Allagan Coat cover up whatever gloves you pair with them. But I was still able to find some room to incorporate elements of Alahra’s usual styles. The tall boots were, of course, already set in stone, which suggested finding a good skirt to go along for the ride. That proved to be a bit of an ordeal, though!

I tried out the Guardian Corps Skirt to start with, since it’s a good general purpose skirt, but it was far too light in color to work with the dark of the Lost Allagan Coat. From there I knew I needed something dyeable, but casters don’t actually have a lot in the way of skirts (with healers getting far more of them). I tried out the Werewolf Bottoms after that, but it wasn’t sold enough in color to work, and as I started running through my mental catalog of options, I remembered using the Acolyte’s Skirt years ago for one of my very first caster glamours, which also happened to be centered around Allagan gear.

The (admittedly minor) ordeal came in when I realized I didn’t have it anymore. Prior to Stormblood‘s launch, I did a lot of inventory purging, since I knew I was going to need retainer space, and a lot of the low level gear didn’t make the cut, since I had so rarely used any of it. So, mid-glamour process, I had to take some time out to farm Sastasha to get the Skirt. It took me six or seven runs, I think, and I actually had decided to call it on the final run when I got lucky and the Skirt dropped.

Once I finally had the Acolyte’s Skirt, I just had to add some finishing touches. Glasses were easy: I nearly always use them for Black Mage glamours, and I have always favored the Reading Glasses for “technological” glamours that center around things like Allagan or Ironworks gear. For gloves, I felt like I needed something fingerless, and in keeping with the Allagan theme, I went with the High Allagan ones, since they fit the black and gold of the Lost Allagan Coat quite well.

And that does it for this one! My brain’s currently mulling over possibilities for one of this month’s Patron requests (a Samurai glamour with a bit of a challenge to it, which has been vexing me), and with some luck I want to have that up soon. I also need to start messing around with Ninja’s Anemos gear in a more serious fashion. I think there’s potential for a Pure White glamour with the Chainmail—I just need to figure out the missing pieces!