Before Patch 4.25 brought us Eureka, I already hadn’t put a lot of time into Lynahra, and of course, once I had relics to work on, my focus remained more or less entirely on Alahra’s progress there. Now that things are winding down in Eureka, with just one set of gear I want to finish and a handful of miscellaneous pieces I’d like to collect for glamour options, my thoughts have come back to Lynahra a bit. After I got Alahra’s Monk to 70, I realized that, overall, I didn’t enjoy Samurai’s gameplay that much, which had some repercussions for Lynahra, too, since I decided long ago to focus on it in place of Warrior. That probably played a part in why I hadn’t worked on her much, if I’m honest.

Of course, Warrior fits Lynahra much better than Samurai does. I’d moved away from it after hitting 60 because I don’t much enjoy Warrior’s gameplay, but since realizing I feel much the same way about Samurai, it seemed better to re-focus Lynahra on the class that fits her thematically since I wasn’t excited about the gameplay for either of her options. Over the last few days, I’ve been squeezing in Leveling Roulettes on her to get her Warrior caught up again, and as I often do when I come back to a character or class I haven’t played in some time, I decided to update her glamour. 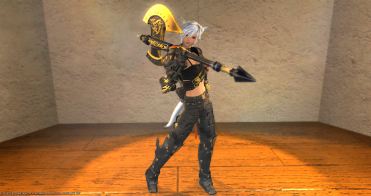 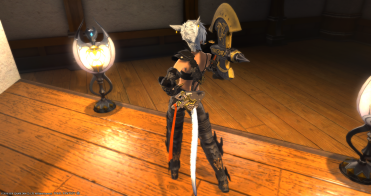 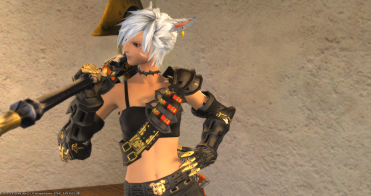 I didn’t have any major problems with Lynahra’s last Warrior glamour, but it did bother me a bit that she was using Alahra’s red and black color scheme, since she’s mostly supposed to wear blues and blacks instead. So, rather than re-inventing the wheel for her, I stuck with the Sky Rat Harness, since of everything tanks have access to, it absolutely suits her the most (I could do without the giant shoulder guard on the one side, though). The Harness thankfully dyes pretty well in Jet Black, without any weird dye channel issues, resulting in a pretty nice black and gold focus.

With the gold on the Harness, I naturally looked to the Replica High Allagan Gauntlets—which I’ve always really liked in Jet Black—and then to the Heavy Allagan Flanchard, since I nearly always pair the two together when I can work out the dyes properly. With all the black and gold, I definitely had to replace the Sky Rat Breeches, since they have too much silver and red to blend in with everything else. The Allagan Cuisses were a pretty easy choice here, but I actually would have preferred to make the Replica High Allagan Trousers of Fending work since I like the way they dye better. Unfortunately, they have too much gold and look rather gaudy, something that definitely doesn’t work for Lynahra.

I spent awhile trying to find some sort of headgear for her, too, as having nothing there is one thing about her that’s bugged me a lot about her previous glamours. She’s a lot less refined than her sister, though, and so far I haven’t been able to find anything that really works (since things like glasses are right out). She looks all right with something like the Skull Eyepatch, but it doesn’t work very well with her hair. I’m not really sure what she would use in an in-character sense, so for now I’ve just stuck to using nothing. Maybe something on the route to 70 will catch my eye for her, though.

As of writing, Lynahra’s Warrior is still level 60, but she only needs another run to hit 61 and get into Stormblood dungeons proper. One thing that’ll be nice is that, outside of the very first Stormblood quest, I haven’t done anything for Warrior on Alahra, which means I’ll be able to experience the story fresh for Lynahra—something that’s not happened before, since I didn’t start her until long after Alahra was already level capped in Heavensward. I’m hoping to start making steady progress on her in the weeks to come and I’m especially looking forward to getting the level 70 Artifact Armor, which I think will work fairly well for her.