With several of my recent glamours for Alahra all featuring plenty of Pure White, I’ve definitely hit that point where I’m going to have to get something white put together for everything. It’s often more difficult to do so for jobs I don’t play as often, since I have less familiarity with the sorts of things that work well with their available gear, so the process is probably going to be a bit slow. For Samurai, though, since they share most of their gear with Monk, I had a lot of ideas in mind for potential centerpieces, and so I moved to tackle that one first.

Since my Eureka crystals are freed up to spend on glamour now, I initially assumed I’d be doing something with the Anemos Myochin Haori next, but honestly, it doesn’t seem like it’s going to be all that fun to glamour around. I’ve nearly always struggled to find interesting things to do with robes and other similar items, since they tend to really dominate any looks they’re used in. The Haori in particular is really extreme about this, since it has the type of sleeves that override any and all gloves, and it’s especially long, meaning that the only things that really shows up with it are the choice made for the Head and Feet slots (and you can’t really see most boots or anything, either!).

So for now, I decided instead to work around a body piece I’d been meaning to use since early in Stormblood, the Ala Mhigan Jacket of Striking. 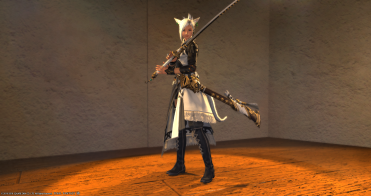 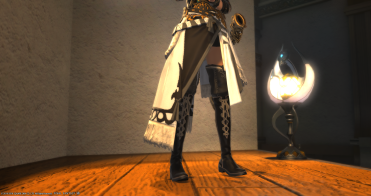 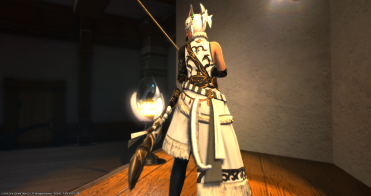 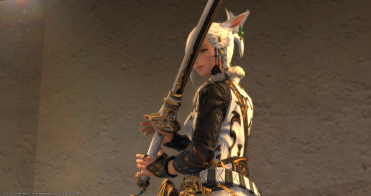 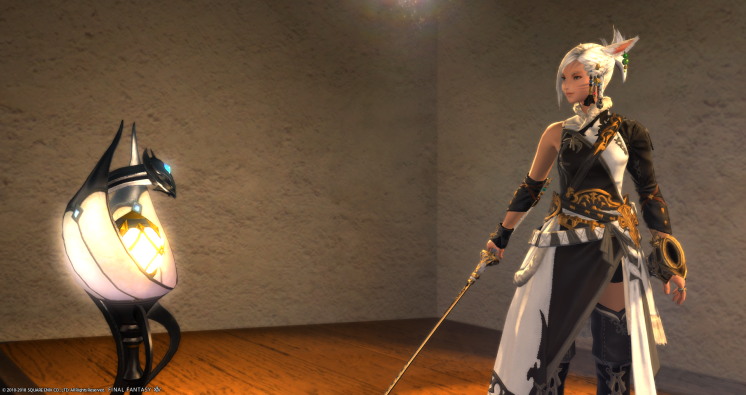 Often, pieces like the Ala Mhigan Jacket are far too wide for me to reliably use, but this model in particular is rather slim on miqo’te, which is pretty important given how wide their neutral stances are. It also dyes rather well, with a prominent black channel and only a bit of the troublesome grey that tags on with Pure White. It ends up dyeing a lot like the Anemos Pacifist’s Vest that I’ve fallen in love with for Monk, which I rather like, since it threads the two looks together a bit. I quite like the sleeves on the Jacket, too, and with so much to love about this piece, I’m actually a bit surprised that it’s taken me this long to get around to using it.

Since the Ala Mhigan Jacket dyes so similarly to the Pacifist’s Vest, the Dravanian Thighboots were an easy choice here after briefly considering both the Expeditioner’s and Tigerskin Thighboots. They’re the only  pair of boots I can think of that naturally pair well with Pure White bodies, since they key off of any small bits of grey just enough to make me not mind that extraneous shade as much as I normally do. Finding something for the Leg slot to accompany them took me a bit, since the Light Steel Subligar seemed too small, the Makai Manhandler’s Quartertights didn’t really mesh, and the Lady’s Knickers (Black) were entirely the wrong shade of black. The Kohakama ended up being the most “neutral” piece I could find, providing just a bit more black while blending in well with the Ala Mhigan Jacket.

Since I like the sleeves so much on the Jacket, I definitely didn’t want to cover them up with longer gloves (and to be honest, I couldn’t have anyway, since none of the available options really fit). Finding a pair of gloves that “flowed” well with them proved to be a bit tricky. None of the various bracers or other gloves I could think of worked, with the only standout option being the Gloam Bracers, which didn’t work due to some color clashing between their metal parts and the metal on the Jacket. But since I was using the Dravanian Thighboots, I checked out the Wristgloves as well, and I thought they worked really well with the sleeves. The colors weren’t quite right, but thankfully the dyeable Tigerskin equivalent blended in just right!

Since glasses would have likely seemed a bit out of place for this one, I went with the staple Scintillant Circlet just for a little bit of an accessory, to finish off the look. Of course, since I’m not actively playing Samurai anymore (Monk is seriously so much more enjoyable to play it’s wild to me), I won’t get a whole lot of actual use out of this look, but I’m pretty happy with it nonetheless. It’d probably work very well for Monk as well, and if I weren’t so in love with the Anemos Pacifist’s Vest, I’d probably consider using it for Monk, too!