While writing up my review of the Angelic Attire, I did get one glamour idea for the set, despite overall thinking I’d probably never use it. The wings are definitely outside of Alahra’s normal wheelhouse (though in an in-character sense I could see something like them for some sort of All Saints’ Wake costume, of course), even if the robe is actually quite fitting in some contexts (though I personally prefer the silver trim on the Demonic Attire for a similar look). All that being said, I couldn’t help but notice the easy pairing of the Doman Iron pieces from my last tank glamour and the Angelic Wings, and a certain part of me loved the idea of a Paladin glamour using the Angelic Circlet, too.

Normally, I’d never really give into that sort of glamour impulse, since I try to keep most glamours at least vaguely reasonable for Alahra in-character. But I do like to make Patron Only Spotlights a bit unique where I can, so I thought using the Wings would be a good thing to try for this month’s. There’s also one weird sense in which the glamour actually works, as a concept: Alahra, like many of my past characters, exists in my Pathfinder campaign setting as a deity. One of her aspects manifests as, more or less, a Paladin from Final Fantasy XI, in their Valor Artifact Armor set (which I never got around to completing, sadly), and angelic wings aren’t exactly out of place for that! That gave me enough to justify putting the glamour together, and from there, it proved pretty straightforward. 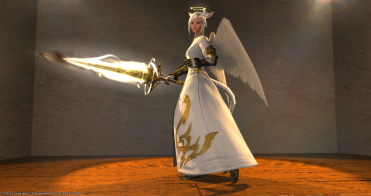 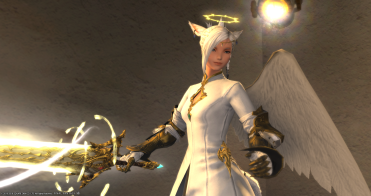 As you can probably guess, the Circlet, Wings, Gauntlets, and Greaves more or less fit together without any hassles. While the Doman Iron pieces don’t strictly match the gold on the Angelic pieces, they fit in well enough that I don’t mind them at all (and the way the Gauntlets dye makes them work well with the robe, much like they worked so well for the Nezha Lady’s Togi in the previous glamour). That left me with only a couple things to decide: which weapon and which legs option to go with. For the weapon, I was already using the Aettir Lux, which makes for a good fiery angel’s sword, so I focused on finding a pair of pants or something first.

My first thought was to go with the Ala Mhigan Bottoms of Fending, dyed in Pure White, but the metal trim on those is more bronze than it is gold, which made them stick out like a sore thumb. I considered just using the Angelic Slops, too, but as always I wanted to avoid using more than two pieces from the same set if I could manage it, so I tossed those out the window pretty early. Since I was, at least thematically, working on a Paladin glamour for this, I next considered the Augmented Gallant Cuisses, but they don’t dye nicely in Pure White, at least for this kind of look. That thought led me to the Lady’s Knickers, though, and while the gold version of them doesn’t exactly match, it fits in fairly well with the overall color scheme.

After that, I thought I was done, so I started figuring out the photo shoot. Halfway through doing the first round of screenshots in my portrait studio, I suddenly remembered Excalibur and the Aegis Shield Zetas, which are naturally gold and white. I glamoured them both immediately and got back to work, much more happy with the results. Then, because I had the idea to take pictures in Lost City Hard Mode for the header image, I slowly soloed my way through the dungeon to the final area, where I decided that it’s really hard to take pictures with the Aegis Shield Zeta in the way. I dropped the shield after that, going instead with the Heroic Spirit to hide it, and retook the first set of images.

It’s rare that I like Paladin glamours without shields (since so many of the animations depend on the shield to make sense), but if you lean in hard on the whole angelic Alahra theme, it makes a certain amount of sense. Not having a shield also works much better with the Angelic Wings, anyway, since just about all shields are going to clip pretty noticeably through the wings on the back. I actually rather like the look in the end, and while I can’t see it for every day use, I may pull it out from time to time for fun!

As always, thanks to all of you Patrons for supporting this site like you do. You’ve made it a lot easier to keep the site going and to expand the sorts of things I can do with it, and I can’t thank you enough for that!