I’ve been flirting with cowboy thematics in my Machinist glamours for a really long time now (more or less as long as I’ve been blogging here). My very first attempt didn’t last me all that long, since I didn’t have any really thematically appropriate body pieces to work with the Serpentskin Fringe Boots that I’m so fond of. As Heavensward moved on, I started working with the Wrangler’s Jacket from Sohm Al instead, and I tried out the dyeable variant of that body for something similar in Stormblood. None of these really stuck around for all that long, since I tend to favor Bard over Machinist most of the time, so I think it’s fair to say that I never really perfected the idea.

With site patron David’s most recent request for a Machinist cowboy glamour, I had an opportunity to try something different. I knew I wanted to avoid focusing on pieces I’ve already tried, in order to keep things fresh, so I decided to start out with the Anemos Chaps since they’re dyeable, but I quickly moved to the Wrangler’s Chaps due color differences. From there, I first settled on using the Leonhart Jacket, which looked pretty nice with the Chaps while being sufficiently different from any of the Wrangler’s Jacket models. But after some experimentation, it didn’t feel like the Jacket was really striking enough to justify using, so I went back to my starting point of the Chaps. 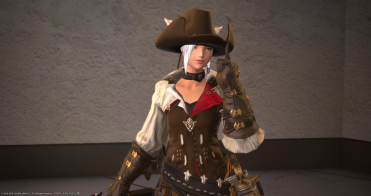 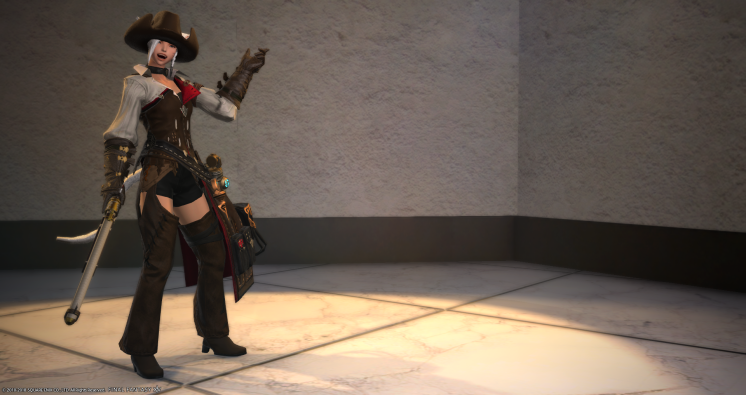 As it turns out, the job-specific Machinist’s Shirt works well alongside the Wrangler’s Chaps, and I’m a bit amazed it’s taken me so long to notice! Going with the shirt made it much easier to really cover the Machinist part of “Machinist cowboy), and gave the glamour something extra that the Leonhart Jacket was lacking. The Shirt did provide a challenge of its own, though, in the gloves department. The corresponding Machinist’s Gloves looked far too fancy for the theme, and none of the longer gloves (which get rid of the baggy sleeves on the Shirt) really looked right. While the Archaeoskin Gloves aren’t perfect in my estimation, they’ve got a nice rugged look that works well with the Wrangler’s Chaps (and they’re also bulky enough that the sleeves on the Shirt don’t stick out quite so much).

The last two pieces were mostly finishing touches. For a proper cowboy hat, I preferred the shape of the Survival Hat to something like the Wrangler’s Hat (and as always, the more I can mix and match the more I’m happier with the final result, too). When it came to boots, I knew I didn’t want to cover up the flare on the chaps, but I also wanted to at least create the illusion of cowboy boots being worn beneath them. The best option I found for that were the Songbird Boots, thanks to their heel. It would have been nice to find a pair with a bit more of a pointed toe, but I think the Songbird Boots fit the bill well enough.

Overall I’m pretty happy here. I’ve not managed to use the Machinist’s Shirt nearly enough, even though it’s one of my favorite pieces from Heavensward, and I think it works really well here (and far, far better than my original thought of the Leonhart Jacket). I got better use out of the Wrangler’s Chaps for this, too, which is another piece I’ve always wanted to do more work with. I’d imagine this’ll get me through a few levels of Machinist at least, since it seems to be the next job I’m working on for leveling, though that may depend on what new toys we get from Eureka: Pagos…

The glamour in this post comes by request of one of Fashion Ninjutsu’s patrons on Patreon, David Haig, who asked for a cowboy glamour for Machinist. If you’d like to make requests yourself, either by voting for the monthly Patron-Only Glamour Spotlight or for the site in general, you can contribute to Fashion Ninjutsu’s Patreon.