It feels like so long ago that we approached the end of Heavensward, where we got a set of dungeon gear that I can’t recall seeing anyone use as a glamour in the year and a half since Patch 3.5 was released. This often happens with sets that lean pretty hard toward styles that are somewhat unusual in FFXIV itself. Even today,  much of the Filibuster’s gear from Balesar’s Wall just feels out of place to me, even after we’ve had about two-thirds of an expansion to get used to seeing it on members of the Ala Mhigan resistance.

I never spent much time collecting Filibuster’s gear, since I was relatively certain I wouldn’t ever need any of it for glamour purposes, but I did hold on to a couple of pieces for Bard and Machinist, because I thought they might have at least some use down the line. Today, I’m quite glad that I did that, as my other Patron request this month was for a glamour for an Ala Mhigan resistance fighter. Of course, it wouldn’t have been any fun to just use the Filibuster’s set in its entirety, so I had to figure out which pieces made the cut, and then what to use with them from there. 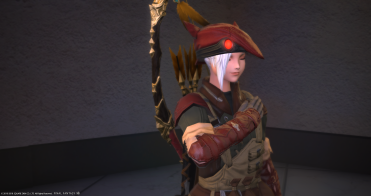 I’ve been hanging onto the Filibuster’s Beret for a long time now. Out of all the Filibuster’s pieces, I thought I might find a use for it at some point, since it’s one of those few hats that doesn’t look absolutely ridiculous on Alahra. Mainly, though, I kept it because I thought the /visor option was cool (which switches the light on the Beret on and off). The Beret is also quite conveniently one of my favorite colors for Alahra, and works well with one of my favorite pair of gloves, the Foestriker’s Mitts. That was a departure from my usual process, since I almost always start out with a body piece in mind. This time I didn’t have one!

After some thought, I decided the Ghost Barque Coat of Aiming might work well with the Beret and Mitts, since it’s got a similar aesthetic to some of the Filibuster’s gear without being quite so over the top. I couldn’t find any dye that really worked, though, and the only red on the Coat was a noticeably different shade from that of the Beret and Foestriker’s Mitts. After that, I pulled out the Gambison from the Fillibuster’s set, and noticed that its shoulder pads were the right shade of red, which was enough to sell me on using it.

With two Filibuster’s pieces now in the mix, I knew I wasn’t going to be using any more of them, and I also figured I should get at least a little bit of Alahra’s normal style mixed in, to differentiate her look a bit from the rest of the resistance. The Guardian Corps Skirt was an easy choice, given its overall utility style (and generally unobtrusive color). That left me with boots to figure out, and that proved to be the toughest part of all. Normally, of course, I try to match gloves and boots for my glamours, but the Foestriker’s Mitts are always pretty tricky for that. None of the dyeable boots I could think of, like the Expeditioner’s Thighboots, Griffin Leather Thighboots, or Oschon’s Sollerets, really worked alongside the rest of the pieces, especially not in red. After several passes through my retainers, I finally settled on the Orthodox Thighboots, which fit in well with the rest of the colors on the Gambison and result in a look that works pretty well for some sort of resistance scout.

I’m honestly surprised by how this one turned out. I didn’t think the Gambison was really that usable at all, but not only did I make it work, I did so while staying true to Alahra’s clothing choices in general. While I don’t think she’d wear something like this canonically given her station in life, if there were ever a version of Alahra that was a more direct part of something like the Ala Mhigan resistance, I imagine she’d end up geared up similarly to this!

The glamour in this post comes by request of one of Fashion Ninjutsu’s patrons on Patreon, Curious Usagi, who wanted to see a glamour for a member of the Ala Mhigan resistance. If you’d like to make requests yourself, either by voting for the monthly Patron-Only Glamour Spotlight or for the site in general, you can contribute to Fashion Ninjutsu’s Patreon.