Taking Patron Requests has been a pretty interesting experience so far. It’s gotten me to look at items I’ve rarely (or never) considered  and resulted in a number of glamours that I’d never have put together on my own. There have been a lot of interesting little challenges along the way, too, and Patron @curious_usagi has been doing her best to give me a headache just about every month. Her latest ask—for a healer glamour with a shinobi theme—was probably the one that was going to stump me if anything ever did. Healers, of course, don’t have much in the way of gear that suggests a Ninja at all, which meant really thinking outside the box for this one.

But luckily for me, Usagi gave me a pretty useful hint: shinobi have to be able to blend in! That seems obvious on its face in retrospect (especially since that sort of thing shows up a lot in FFXIV‘s Ninja Job Quests), but it didn’t occur to me until she said as much. That gave me the direction I needed, though, and I started thinking a lot about various Far Eastern sets that I could use for a shinobi hiding in plain sight on the streets of Kugane. That naturally led me to focusing on Scholar, since having a book is pretty inconspicuous compared to carrying around an elaborate star globe or ornate cane, and it seemed reasonable that a Far Eastern noble might often keep reading material nearby, which quite naturally pointed to the Far Eastern Noble’s Attire. 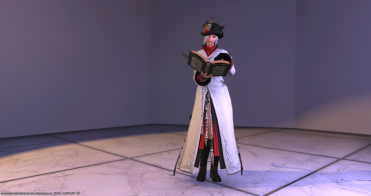 After deciding that I did in fact want to use the Far Eastern Noble’s Robe (which is one of the few Robes in the game that looks quite nice on Alahra), I decided that I wanted the rest of the glamour to at least vaguely make sense for a Ninja in disguise. That meant looking for items that would be suitable for mobility in particular while also not looking out of place under a moderately fancy gown like the Far Eastern Noble’s Robe. The Robe’s black trim played into this pretty nicely, letting me go with black for all of the other pieces to fit in with Bunny’s requested theme.

I actually don’t remember the exact order I settled on everything for once (I’m writing this some time after putting the look together since life got a bit busy!), but I chose just about everything near-simultaneously anyway, so it doesn’t matter too much! With the Far Eastern Noble’s Robe being open in the front, I figured Alahra would probably show a little leg, which led me toward knee boots and shorts, which would work well if she had to make a quick getaway, anyway. The Makai Quartertights were the perfect choice here—while they aren’t available for Ninja (which bugs me to no end), they are available for both Samurai and Monk, making them a decent choice for a combative healer look. The Warwolf Boots were the simplest and most functional choice I could think of (and I’ve loved them since A Realm Reborn—they were pretty much a Scholar staple for me back then!).

While the Makai Fingerless Gloves aren’t really visible with the long sleeves of the Noble’s Robe, they made a lot of sense to me since I was already using one piece of Makai gear. Conceptually, I thought they’d also make sense assuming some sort of leather armor underneath the Robe, too, even if that’s not something I could really represent in the glamour itself. If Ninja or Monk could wear them, I’d probably have been using them for glamours for months and months now, so I figured they were a pretty solid choice for a Ninja pretending to be a healer!

The last piece (which I’m sure I actually settled on last), the Cloche, doesn’t especially fit in with the shinobi theme in a direct way, but I wanted something the top off the actual disguise. One of the feathers matches the sort of salmon-colored trim on the Robe, which makes the hat a lovely compliment to the gown itself combined with its naturally black color. On top of that, in terms of the theme, it serves as something of a misdirection: the Cloche is an Ishgardian accessory, which would naturally draw attention away (“Where did you get that strange hat?”) from things like the boots that are—although fashionable!—meant for combat!

I had a lot of fun putting this one together, and I very nearly made it a permanent glamour for my Scholar. The only thing that stopped me was not wanting to overwrite the Jet Black dye I had spent on the Anemos Orator’s Bottoms! That stuff gets kind of pricey now that I’m no longer a maniacal crafter-baroness resting on mattress made of coin, and so I’ve gotten a lot more careful about how I use them. But I did get very close to swapping over to this one in a more permanent fashion, which I’d say is a positive mark for the look itself!

The glamour in this post comes by request of one of Fashion Ninjutsu’s patrons on Patreon, Curious Usagi, who wanted to see a glamour for a shinobi-themed healer. If you’d like to make requests yourself, either by voting for the monthly Patron-Only Glamour Spotlight or for the site in general, you can contribute to Fashion Ninjutsu’s Patreon.