In general, the FFXIV community likes things to be familiar, and you can’t really blame them. Ever since A Realm Reborn, the developers have played it safe, with very little in the way of changes to both the game’s core structure but also in the finer details. If you’ve done a Dungeon in FFXIV, you have a pretty good idea of how another Dungeon is going to proceed (especially in the case of dungeons released at levels 50 and higher). You can expect similar things from each Trial in the game and similar things from each Raid, too, and that holds true for most “areas” of the game’s content, including—most importantly when it comes to Eureka—the game’s “relic” weapon quests.

Throughout ARR, the developers actually did experiment a bit with what they wanted relics to represent, ultimately settling—in the form of the long Zodiac Weapons story—on content that was aimed at players who wanted to invest time, rather than cutting edge play, into gearing up. Initial Zodiac stages were often quite grueling, resulting in plenty of feedback about the intense nature of the grind, and moving into Heavensward, the development team took much of that feedback into account. (I’ve spoken at length about the Heavensward relic quest here). The resulting Anima quest line was far more “casual friendly” than anything in the Zodiac saga, with completion of most of the stages being entirely possible while doing normal things like capping weekly Tomestones, allowing for busy players with limited playtime to work on weapons while doing other weekly tasks. 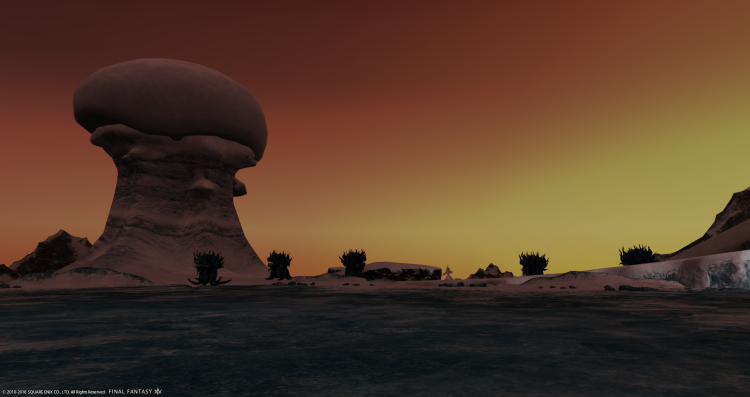 The first chapter of Stormblood‘s Eureka, intended to be the new vehicle for relic-style weapon quests for FFXIV continued this trend. While it’s not entirely clear how much of the NM train style of approaching the content was intended by the developers, Eureka Anemos was set up in a way that allowed people to progress rapidly on their way to the new Anemos weapons. Much of that progression could be done fairly passively, too, with often a hundred or so players all congregating to handle spawning reward-heavy NMs in the zone, meaning no one person’s contribution was especially needed. As an added bonus, the NMs also provided weekly Tomestones of Mendacity, meaning that—just like during Heavensward—you could work on your weapon while handling your main weekly task for the game.

And all of this meant that Eureka Pagos hit the community like a sack of bricks with how much different it was from previous iterations of the content. The new zone of Eureka received severe backlash from the FFXIV community. Compared to Eureka Anemos, Pagos lacked the rapid progression provided by the NM Train, which was completely neutered by a reduction in the number of Notorious Monsters, their spawn rates, and their XP rewards. Progression was entirely tied to XP chaining enemies that had high amounts of health and offered pretty minuscule XP rewards relative to the amounts needed to gain Elemental Levels. Even the new element of Happy Bunny treasure hunts seemed poorly implemented—the associated Elemental Conflicts gave no XP and took forever to kill at the content’s initial launch, meaning they were completely ignored, since their rewards were unclear and the grind for Elemental XP was so intense. 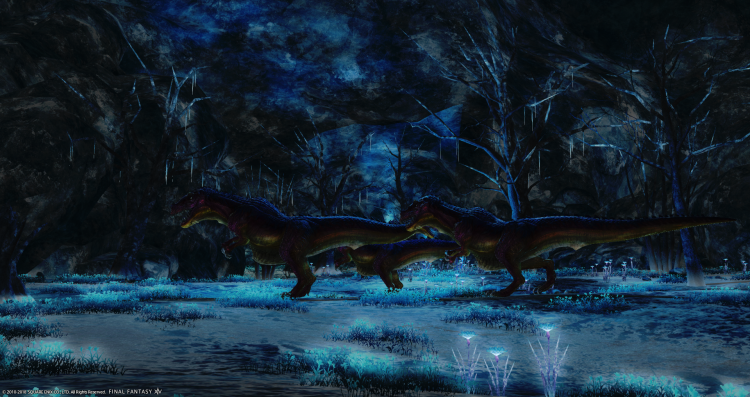 Adjustments were swift, faster than any changes to new content of this sort that I can recall in FFXIV‘s history. In a hotfix, the health of enemies in Elemental Conflicts was reduced, and not long after, NMs were both made easier to spawn and more rewarding with massively increased XP rewards. For a variety of reasons, I didn’t spend much time in Eureka Pagos while it was in its original state and didn’t have time to really dive into it until after these changes were made. I can’t comment too much on the initial state as a result except to say that it was very clearly a misread of what the playerbase expects from relic quests (and those expectations are entirely on the developers).

I did, though, finish my Elemental Knives at the end of last week, meaning I’ve spent quite a bit of time now delving into Pagos (though, for once, nowhere near as much time as some folks, who were on their second or third weapons as I was finishing my first!). While I’m sure I’m in the minority on this one, I actually think—with the early changes to the content in mind—Pagos has actually accidentally improved on Eureka Anemos in some pretty significant ways. Most of these improvements aren’t going to really appeal to most of FFXIV‘s playerbase, but with Pagos, the developers seem to have put something together that really captures levels of immersion that Anemos approached but could only really tease at. 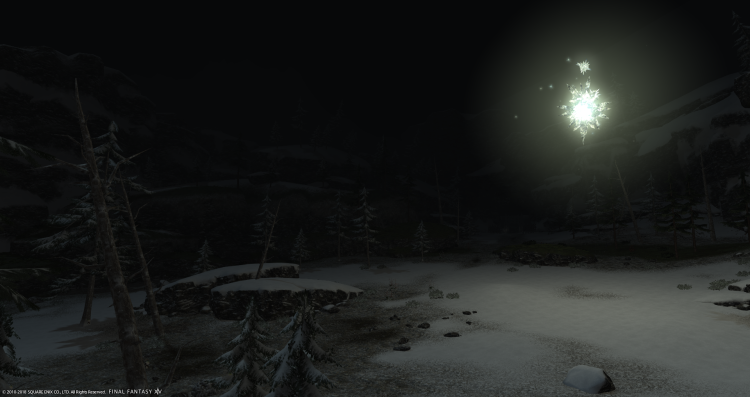 In Eureka Anemos, with the NM train being so rewarding for the effort involved, much of the zone languished unwanted and ignored (which I spoke about a bit before here), with core features like the XP chain system and the Magia Board being largely irrelevant to the overall experience. With Pagos, the developers seemed to want to kill off the train entirely, for a much more railroaded (and incredibly grueling) experience focused on XP chains. That proved to not work at all (though it could have if XP rewards weren’t so meager), and the changes to NM rewards in Pagos brought a return to a focus on NMs, but due to several factors unique to Pagos, NMs are no longer the sole focus of the content, and that’s a significant improvement over Anemos.

The first factor is that Pagos has fewer overall NMs—15 to Anemos’s 20—which means that it’s harder to maintain the “cycle” of the NM train without dead time before the first NM in the zone was killed respawns. This naturally slows down the momentum of the train, which tends to mean people drift away from it in favor of taking care of other relevant tasks in the zone (of which there are several that I’ll touch on later).

Even Pagos’s terrain helps to de-emphasize the NM train. While Anemos could roughly be divided into sections based on appropriate Elemental Levels, travel between those sections was relatively straightforward regardless of player level, meaning that even low levels could participate with relative safety in most of the zone’s NM encounters. That’s not the case in Pagos at all, with roughly half of the NMs spawning long distances away from the zone’s base camp and the low level aetheryte. Additionally, since higher level players tend to have other things to draw their attention away from mindless NM farming, they may not always want to drop their XP chains and Happy Bunnies to hit every single NM because of greater travel times being involved. 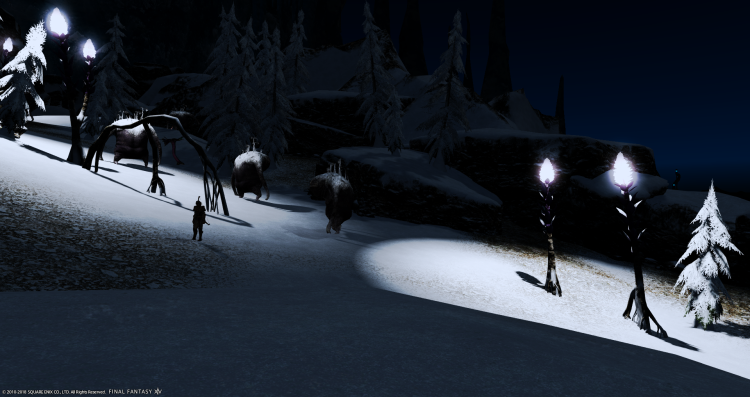 And most key of all is that, as I’ve already mentioned, there’s more to do in Pagos than there ever was in Eureka. While NMs now provide large XP rewards, facilitating a pretty comfortable rate of XP gain with a little patience (and effort to spawn them, which is important), there’s more going on, especially for high level players. Leveling players can break off into XP chain groups to complete Challenge Logs. Happy Bunnies proved to be relevant, since Elemental Conflicts can sometimes prevent other NMs from spawning, not to mention that they’re the primary source of Hakutaku Eyes, which are needed as part of the process of earning the FFXI homage of the Optical Hat. Most of the zone’s rarest and coveted items come from special lockboxes only available from one particular NM (which is kind of a pain to spawn) and XP chaining a few classes of high level enemies. “Light” parties, focused on Void Dragons (or max level enemy chains), are also more efficient than NM trains for advancing the main part of the grind needed to complete the Elemental weapons that serve as the capstone of Pagos.

Taken all together, the lower number of Notorious Monsters, Pagos’s less friendly terrain, and its wider variety of relevant activities mean that the whole zone of players won’t naturally congregate all together. Groups of midlevel players might focus on spawning NMs in northern Pagos, while lower level ones are probably focused on the NMs in the southern half (and their Challenge Logs). High level players probably aren’t focused on NMs at all in many cases, unless they’re short on Pagos Crystals for the middle stage of weapon progress (though I had more than enough by the time I hit level 35, personally). With everyone scattered throughout the zone, NMs are more like events players congregate to tackle before dispersing again, rather than a never-ending cycle in which they soon stop being exciting moments of punctuation through one’s time in the zone. 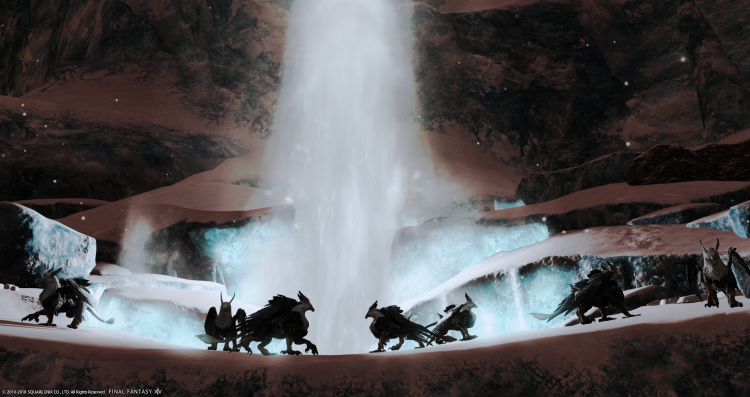 Ultimately, that’s more the sort of experience I wanted out of Anemos, and I personally suspect that was more what the team wanted out of it to begin with, too. Anemos missed the mark on that goal, though, and Pagos tried to enforce it in ways so draconian as to all but kill the content. Without the changes, Pagos probably would have been about as dead as Diadem was through the middle period of Heavensward, and thankfully the developers took quick steps to rectify that. It’s not clear to me whether or not Pagos will survive the test of time at this point: it’s clear that the community as a whole still seems to have a negative opinion of it. We do already know that the next stage, Eureka Pyros, will be more like Anemos, so it’s possible that Pagos will survive so long as Pyros keeps the playerbase engaged.

Personally, Pagos is exactly the sort of grind I like to see for relic quests in FFXIV—with the changes, it hits that sweet spot of an intense but not impossible grind that characterized much of the Zodiac Saga in A Realm Reborn but was largely absent from the Anima Saga of Heavensward. It’s also more in line with the original design goals for the weapon quests of being about time invested, something that doesn’t necessarily mean they’re aimed at “casual” players. But all of the Anima Saga and Anemos lead players to expect grinds that were friendly to players with limited playtime, and even if I agree with and the overall design of Pagos, I think trying to go back to that style of grind was a poor decision on the part of the developers.

Pagos, even more than Anemos before it, feels like content from a time outside of the present moment, but as a result, it also serves as something of a bittersweet reminder of just outside of time I am as an MMO player in the modern era. Content like this is difficult to make work these days, and it’s certainly difficult to make work in a game that—on the whole—has become more and more focused on short bursts of play to fit the wants of its playerbase. I enjoyed the experience of Pagos immensely, but I’m certainly in the minority on that, and I think by now I have to admit that FFXIV is never truly going to be “for me.”