As I mentioned, by the time I got through writing up my post for the healer glamour from last week, I had already made some changes to the look. Often, I’ll wait to post such things, since I try to cycle through the jobs and roles that I put up, so that things don’t get too repetitive. You’ll have to forgive me for two healer glamours in a row this time, though. After I had moved on to the new and improved healer glamour for my White Mage, I became so enamored with the look that I spent a few hours doing nothing but taking screenshots of it. When that mood strikes me, I know a glamour is a real keeper, so I’m going to go ahead and talk about this one right away. 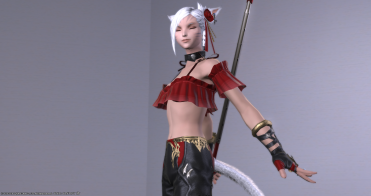 I’ve no doubt talked about this before, but I really love the High Allagan Pantaloons—they’re one of the only pairs of pants in the game that don’t look ridiculous to me. I love the hints of red and gold they have, the perfectly proportioned flare at the ankle, and their sleekness. Most pants in FFXIV are baggy or skin tight in odd ways, and they tend to look rather strange on Alahra as a result, but not the High Allagan ones! I haven’t used them near as much as I would like, though, because—while they’re an amazing piece—it’s often hard to find tops that work well with them.

Most of the time, I’ve settled on using the Holy Rainbow Shirt with them, like I was using most recently, but that shirt is kind of baggy, making it a bit of an odd fit for the Pantaloons. One of the best options I’ve found to get around that is the Scion Liberator’s Jacket, but its red isn’t quite the same on the Jacket as on the pants, which is the sort of thing that can really nag at me after using a glamour for a while. Other light options, like the Hempen Camise (too much red!) or the Gryphonskin Breastguard (adds pink when dyed!) never really seemed to click right to me. But this year’s Midsummer festival gave us the new Endless Summer Top, which as it turns out, is exactly the kind of thing I’d been looking for to use with the High Allagan Pantaloons.

While I debated dyeing the top black, leaving just the thread of red going across it, slightly mirroring the color scheme of the pants, that ultimately seemed like too much black, and so I went with the normal Dalamud Red. Then all I had to do was find a pair of gloves. The Makai Moon Guide’s Fingerless Gloves didn’t quite look right with the armlets of the Top, and neither did the Star Velvet Long Gloves or any other over-the-elbow glove I tried. Thankfully, healers have unique access to the High Allagan Gloves of Healing model, which is undoubtedly one of my favorites in the game. Given that I was already committed to the Pantaloons, the corresponding Gloves seemed like an easy fit.

And the end result is likely to stick around for a long time. While I haven’t (as of writing) committed this one to my level 70 healers, I’m almost certain that I’m going to, as I’ve not had a look excite me this much in a long time. I’ve been trying to sort out a glamour for healers like one of my old caster ones for some time now, and with the Endless Summer Top, I’ve finally got what I wanted! I may not keep the Shisui Mengu forever, since Alahra tends to prefer glasses, but at least for my White Mage’s journey to 70, that’s probably going to stick around.