One thing that’s always vexed me when putting together glamours for All Saints’ Wake is that Pumpkin Orange Dye doesn’t match the shades of orange used on the seasonal glamour items. Most of the time, Sunset Orange has worked better, but even that’s not a perfect match, since it lacks some of the brightness of the ribbons on gear like the Witch’s Attire. While we still don’t have a perfect match for things, Stormblood‘s addition of Metallic Orange gave us a much better choice. It’s bright in a gaudy or corny sort of way, which works really well when I’m trying to be kind of dorky about all of it!

When I set out to do my caster glamour for this year, I knew I wanted to do two things: 1) use Metallic Orange; and 2) use the Witch’s Coatee. I also had something of a secondary goal to pair the Republic Signifer’s Fingerless Gloves with the Coatee, since I’d seen that combination on Twitter and thought it was rather neat. With a full three of the five slots more or less decided from the outset, I figured I’d have an easy time putting this one together. I got my favorite Valentione Skirt out of storage, dyed it Metallic Orange, and slipped on the classic High House Halfboots, and I had a look! But once all the pieces were in place and I got a sense of how it looked for Red Mage, I wasn’t happy. 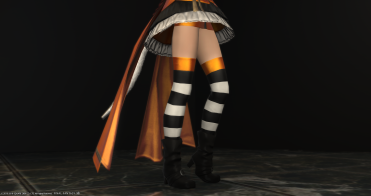 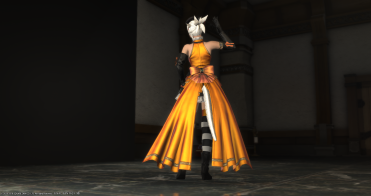 The look I put together mostly seemed to fail because I wasn’t happy with the Witch’s Coatee for Red Mage. While it’s one of my favorite tops in the game, it felt a little too flimsy for Red Mage in particular. Since that’s the caster I’m most often using these days (and really, the only job I’ve been playing outside of Ninja), I had to rewind a little bit and swap some things out to have a satisfying glamour. The Republic Signifer’s gloves were the first thing to go. While I still rather like them, they didn’t seem to fit in well the overall style I was going for. The Witch’s Gloves made the most sense of the available seasonal gear, since the look I started with wasn’t even using any of the All Saints’ Wake pieces.

I had already used all of the resulting pieces together a couple years ago, though, so I decided I should find a different top to work with. I went back and forth between the Vampire’s Vest (which I had already used last year for casters, in orange no less) and the Best Man’s Jacket for a little while, but I ultimately settled on the Songbird Jacket. The Songbird Jacket’s color scheme pairs really well with the striped tights that come alongside the Valentione Skirt—which I never feel quite right using outside of this time of year—and since I had not used them together previously (kind of surprising, really!), that seemed the best choice.

The Songbird Jacket definitely demands a hat of some kind, though. I toyed with just using the Songbird Hat and also experimented with the High House Cloche for a little bit. But the piece that really seemed to perfect the look was the new Quaintrelle’s Hat. Since it sits on the right, rather than the left like the Songbird Hat, it looks much nicer with Alahra’s hair, and its simple style allows it to work alongside just about anything (unlike the Cloche, which has those feathers that can look out of place with stuff like the Songbird Jacket).

I’m really happy with this one now that it’s done, though I’ve not actually had a chance to properly employ it, yet! I really only play Red Mage while I’m finishing up my weekly tomestones in Eureka Anemos, and I’ve not gone in since putting this glamour together just yet. I’ll be doing so soon, though! I’m not yet sure if I’ll be doing further All Saints’ Wake glamours this year, since I’m not playing other jobs much. I might be gearing up my Scholar a bit, though, so that I can use it for my weekly O12 run, and if I do decide to do that, I’ll definitely figure out something seasonal for it, too!