Like I mentioned last time, I’m finally getting around to picking up the Bonewicca glamour gear from Swallow’s Compass, and along with the Shadow’s Chestpiece, I also picked up the Whisperer’s Jacket. With its fancy “wings,” the Jacket is probably one of the most unique we’ve seen in FFXIV so far, and I assumed that meant I’d never find much use for it since those wings are so wildly out of character for Alahra. I soon found out, though, that any pair of long gloves will make those wings disappear, making the Jacket much more applicable for general glamour use than I thought!

As with the Bonewicca Shadow’s Harness and because I was planning for a new Red Mage glamour, my first plan was to go for a Dalamud Red glamour using the Scion Healer’s Highboots.  Gloves proved too tricky to make that work, though, as the only solid pair of long gloves that worked in red and black were the Gloves of the Black Griffin. While they honestly don’t look that bad with the Whisperer’s Jacket, they’re a little too sinister for Alahra overall (even if I’ve used them once before). The Republic Signifer’s Fingerless Gloves worked fairly well instead, but they’re just sort of wrong in much the same way for Alahra most of the time, making it difficult to commit to them. 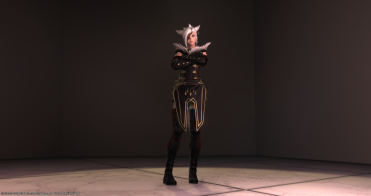 Once I’d written off Dalamud Red (at least for now!), I moved instead to using Wine Red alongside the Bogatyr’s Thighboots of Casting. Those are an old, old favorite of mine, though I’ve found few reasons to use them since Y’shtola’s boots became available. I still wanted some red in the glamour, though, and I thought I might be able to find a better pair of gloves to go with them than I could for my first choice. As it turns out, I was right about that: the Dravanian Armguards of Casting are a much better fit for the Jacket, with their gold studs and mix of dark red and black compared to other options.

Contrary to my normal habits, I settled on headgear next—since I was already using the Bogatyr’s Thighboots, it was easy to also include the corresponding Blinder, which is another old favorite of mine. That last thing I had to figure out was what to use for the legs. At first, since I was working with the Bonewicca Jacket in Wine Red, I settled on the Anemos Duelist’s Breeches in the same color, since they end up with a decent mix of dark red, black, and gold when dyed. But something about that wasn’t really working for me, and after some thought I realized I needed to change the color of the body piece. When dyed, the Jacket just doesn’t provide enough natural black on its own to work with all of the red and black pieces I had selected elsewhere.

So, I swapped over to the Jacket’s default color scheme, which has a bit of reddish-purple for accents that, in most lighting situations, matches the dark red of the Bogatyr’s and Dravanian bits I was using. That had the side effect of making the Red Mage specific Breeches seem out of place, though, and I had to figure out something different there instead! The relatively new Pagos Culottes from Eureka’s 4.3 chapter were just the thing I needed, with a simple dyeing pattern (at least, with the leggings covered) and even a bit of inlaid gold for the perfect match to the Bonewicca Jacket.

Of course, as with most looks of this sort, I probably won’t stick with this one forever—at least not exactly in this form. Given long enough, I’ll inevitably want something in Pure White again, and my initial experiments with the Bonewicca Whisperer’s Jacket in that dye didn’t seem like they were going to be very fruitful. For the time being, though, I am quite satisfied with this one, and it should make my weekly dive into Anemos for Tomestones a little less ridiculous (since I was using my All Saints’ Wake glamour last time)!