I’ve been a role-player for most of my life now, having gotten started with Dungeons & Dragons in my pre-teen years. Although I’ve been creating characters with role-playing in mind ever since, I’ve never much been one to create characters for their own sake. I more or less only create when needed—for a new tabletop or MMO, usually. When it comes to MMOs specifically, though, I’ve almost always played the same character since I started them with Final Fantasy XI: some version of Alahra, tailored to fit the game’s setting as best as I can manage. For the Final Fantasy MMOs, the flexible job systems have meant never being prompted to create new characters (whereas I had several characters in World of Warcraft to try out new classes, even if my main was, for a long time, Alahra as a Night Elf).

So, I was kind of surprised that I got a character idea while playing, of all things, Magic: the Gathering Arena. For whatever reason, after I picked up the game again for the Open Beta, I started naming my decks after various characters that I felt fit the colors in the deck. That left me in a bit of a bind when I started to mess around with one (a Blue/Red Wizards deck) that didn’t really fit any of my existing characters. Slowly but surely, as I played with the deck (and lost a bunch—it’s not all that great!), ideas started popping into my head for a new miqo’te on FFXIV, a Seeker of the Sun. I knew she would be a Machinist, too, because she was wearing goggles in my head from the start. After some thought and budgeting to make sure I could swing a pair of jump potions from the Mog Station (because I was absolutely not going to do the Main Scenario for a third time!), P’trahna (she prefers Petra!) was born. 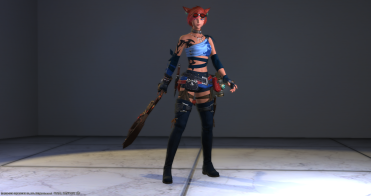 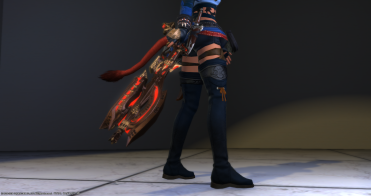 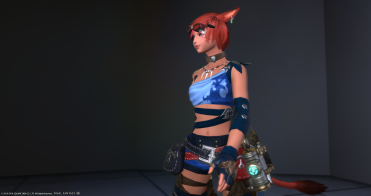 Little did I know that getting the Machinist’s Goggles was going to turn into an adventure all its own. I didn’t realize that you needed a pretty high Grand Company rank to unlock Hunts, which I was going to need to pick them up with Centurio Seals in Ishgard. It doesn’t make a whole lot of sense to me that you don’t have easy access to your level 60 Artifact Armor with a jump potion (since, for some reason, they haven’t been added to the Calamity Salvager, despite now being a quest reward for the level 60 Job quests), but either way, I was determined. I spent more or less an entire day blazing Petra through the ranks of the Immortal Flames, all to have something so simple as the right headgear for a glamour.

All that time was absolutely worth it, though, as I couldn’t be much happier than I am now with a fully glamoured Petra. I knew before I had her created that I was going to be using the Machinist’s Goggles and the Pagos Shirt, since I imagined her both with little armor and tattoos, given her upbringing, which I’m guessing happened in Thanalan (I wasn’t able to find solid information on the geographical locations of all the Seeker tribes, but given that she’s part of the Basilisk tribe, Thanalan makes sense). But the Pagos Shirt was going to provide its own challenges, since I’ve often had trouble putting together looks I’m happy with using it (or the original Arachne Shirts).

I did know that whatever I used had to work in blue—in a nod to her origins as, more or less, a Blue/Red Magic deck, I wanted those two colors to be central for her. Originally, I envisioned her with blue-streaked red hair, too, but I couldn’t quite make that color combination work with the available shades (though it’s possible I missed the perfect combo, and I plan to experiment with her hair again at some point in the future). That made it all the more important for blue to feature in her clothing choices. The Pagos Shirt dyes in a way that creates a shade that can’t quite be matched with existing dyes, but Dark Blue was a pretty close match for the color of the arm wraps, and finding pieces that worked in that dye was crucial.

I settled on the Expeditioner’s Pantalettes first, since other options, like the Miqo’te Loincloth or Gryphonskin Pantalettes, didn’t seem to fit in well with the Pagos Shirt. Gloves and boots proved to be pretty tricky, though, which I was expecting. Given how light the Shirt is, it looks really strange with a ton of the available glove options. While I was working on Petra’s Grand Company rank, I defaulted to using the Pagos Field Dressing, but they didn’t really feel quite right once I finally had the Goggles in place. Since I also intended to use the High Allagan Pistol (because it works really well with the Goggles), I decided the gloves needed some metal on them, with the High Allagan Gloves of Aiming being the natural first choice. They didn’t look right in Dark Blue, though, and I eventually settled on the Punching Gloves instead.

For the boots, I started and ended with the Expeditioner’s Thighboots, but I made a stubborn effort to find something different instead. Starting anew with a fresh character as I was, I really wanted to break out of my normal glamour habits to some degree, and that meant considering regular old boots instead of the thigh high ones so common in my glamours for Alahra and Lynahra both. So far, though, I’ve not been able to find a pair that both meshed with the rest of Petra’s look and looked right in Dark Blue dye. I’ve not given up on finding a pair, but for now I’m still pretty happy with how the Expeditioner’s Thighboots fit in with the rest of the look (and unlike plenty of other boots, they actually look fine in colors other than brown or black, so it’s tough to beat them anyway).

For now, it’s not likely that Petra will have any secondary jobs, since I want to be sure to save time to wrap up leveling the rest of Alahra’s jobs (and hopefully also finish Lynahra through the Stormblood Main Scenario before we get to 5.0), so I won’t likely be making a lot of glamours for her. Things may change if I dive into leveling her past 60 (which is at least something of a possibility, since my SO has a jumped character she’s been considering leveling). I’m not sure if any of the post-60 Stormblood gear is a good fit for Petra or not, yet, but sometimes it takes actually seeing stuff to realize it works, and that might mean new glamours as she goes. We’ll see!