For this month, patron of the site @curious_usagi wanted me to put together a Bard glamour with items fit for Japan’s feudal era. If you’d like to make requests of your own, you can support Fashion Ninjutsu on Patreon.

For an expansion half-centered on Hydaelyn’s Eastern continent, Stormblood hasn’t provided as much in the way of solid Eastern glamour options for me. While we’ve gotten a number of sets patterned after real world styles from Asia, many of them have been modeled somewhat poorly (with tail clipping being a major issue), and most have been long garments or heavy armor, often ill-suited to most of the jobs that I play regularly. In particular Accordingly, I’ve largely ignored most of the Eastern gear we have gotten, outside of a couple choice pieces here and there.

That’s not to say we haven’t gotten some interesting pieces in those styles, though. Though they weren’t really my style, the Tomestome offerings from Stormblood‘s middle raid tier are generally modeled much better than the expansion’s previous attempts at medieval Japanese armor from the Deltascape raids. After some experimentation with other options (such as the Asuran Dogi) and further back and forth with @curious_usagi following her request, I ultimately settled on working around the Ryumyaku Jufuku of Aiming for this one. The thing that stood out to me most about it were its colors: I don’t normally work in greens much, and I thought that’d provide an interesting starting point. 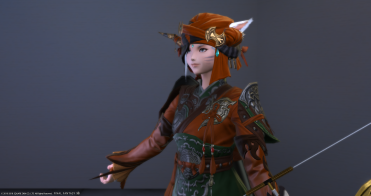 As you can no doubt tell, I ended up leaning more into the orange and browns of the Jufuku instead, which largely came down to the process of settling on a pair of gloves or gauntlets. Like just about every body piece in Final Fantasy XIV, the Jufuku has arms that I really didn’t care for, with wide protruding elements that looked a bit silly on a miqo’te frame. Finding a longer pair to hide most of that proved tricky, though, as it often does. Plenty of options, like the Oschon’s Gauntlets of Aiming, clipped through the shoulder plates, while others, like the Allagan Gauntlets of Aiming, had pesky, undyeable grey that seriously clashed with the Jufuku’s colors. The Torrent Armguards work really well when dyed Mesa Red, with the darker leather shades actually pairing up almost perfectly with the Jufuku’s brown (even if they do clip every so slightly through the shoulder plates).

After the problem of gloves was resolved, I didn’t have much else to experiment with, since the Jufuku obscures any chosen leg armor (and I can’t even remember as I write this which piece is actually glamoured—not that it matters!). I settled on the Tigerskin boots even before the Armguards, since I noticed pretty quickly that their orange laces actually paired well with the Jufuku with the boots themselves in a dark brown color. After that, I knew I wanted a little bit of flair for the head piece, with my first stop being the Tigerskin Tricorne of Aiming (since I was already using the boots). That looked positively ridiculous with the Jufuku, though, so I started looking at other options. The Ryumyaku Hachigane looked terrible with Alahra’s hair, which was a shame, and I didn’t really like the style of something like the Asuran Hachigane either.

Ultimately, I settled on the Turban to top the look off with a bit of the exotic and also to add a little more cloth to pair up with the Torrent Armguards. The result is kind of piecemeal, combining disparate elements in a way that’s fitting for Bard in FFXIV‘s world, with their often outlandish Artifact Armor sets. With it all put together, I’m also a bit curious about working with some of the other Ryumyaku pieces, with the Striking body foremost in my mind. I don’t know if I’ll get around to that anytime soon, since I’ve got so many things on my glamour list these days, though!